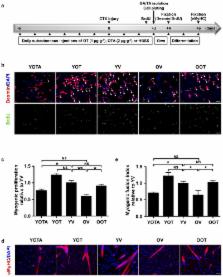 The regenerative capacity of skeletal muscle declines with age. Previous studies suggest that this process can be reversed by exposure to young circulation, but systemic age-specific factors responsible for this phenomenon are largely unknown. Here we report that oxytocin- a hormone best known for its role in lactation, parturition, and social behaviors - is required for proper muscle tissue regeneration and homeostasis, and that plasma levels of oxytocin decline with age. Inhibition of oxytocin signaling in young animals reduces muscle regeneration, whereas systemic administration of oxytocin rapidly improves muscle regeneration by enhancing aged muscle stem cell activation/proliferation throughactivation of the MAPK/ERK signalling pathway. We further show that the genetic lack of oxytocin does not cause a developmental defect in muscle, but instead leads to premature sarcopenia. Considering that oxytocin is an FDA approved drug, this work reveals a potential novel and safe way to combat or prevent skeletal muscle aging.

Rejuvenation of aged progenitor cells by exposure to a young systemic environment.

Eric R Girma,  Thomas Rando,  Irina M. Conboy … (2005)
The decline of tissue regenerative potential is a hallmark of ageing and may be due to age-related changes in tissue-specific stem cells. A decline in skeletal muscle stem cell (satellite cell) activity due to a loss of Notch signalling results in impaired regeneration of aged muscle. The decline in hepatic progenitor cell proliferation owing to the formation of a complex involving cEBP-alpha and the chromatin remodelling factor brahma (Brm) inhibits the regenerative capacity of aged liver. To examine the influence of systemic factors on aged progenitor cells from these tissues, we established parabiotic pairings (that is, a shared circulatory system) between young and old mice (heterochronic parabioses), exposing old mice to factors present in young serum. Notably, heterochronic parabiosis restored the activation of Notch signalling as well as the proliferation and regenerative capacity of aged satellite cells. The exposure of satellite cells from old mice to young serum enhanced the expression of the Notch ligand (Delta), increased Notch activation, and enhanced proliferation in vitro. Furthermore, heterochronic parabiosis increased aged hepatocyte proliferation and restored the cEBP-alpha complex to levels seen in young animals. These results suggest that the age-related decline of progenitor cell activity can be modulated by systemic factors that change with age.

Saul Villeda,  Jian Luo,  Kira I. Mosher … (2011)
Summary In the central nervous system (CNS), aging results in a precipitous decline in adult neural stem/progenitor cells (NPCs) and neurogenesis, with concomitant impairments in cognitive functions 1 . Interestingly, such impairments can be ameliorated through systemic perturbations such as exercise 1 . Here, using heterochronic parabiosis we show that blood-borne factors present in the systemic milieu can inhibit or promote adult neurogenesis in an age dependent fashion in mice. Accordingly, exposing a young animal to an old systemic environment, or to plasma from old mice, decreased synaptic plasticity and impaired contextual fear conditioning and spatial learning and memory. We identify chemokines - including CCL11/Eotaxin – whose plasma levels correlate with reduced neurogenesis in heterochronic parabionts and aged mice, and whose levels are increased in plasma and cerebral spinal fluid of healthy aging humans. Finally, increasing peripheral CCL11 chemokine levels in vivo in young mice decreased adult neurogenesis and impaired learning and memory. Together our data indicate that the decline in neurogenesis, and cognitive impairments, observed during aging can be in part attributed to changes in blood-borne factors.

Mark Lee,  Calvin J Kuo,  Thomas Rando … (2007)
The regenerative potential of skeletal muscle declines with age, and this impairment is associated with an increase in tissue fibrosis. We show that muscle stem cells (satellite cells) from aged mice tend to convert from a myogenic to a fibrogenic lineage as they begin to proliferate and that this conversion is mediated by factors in the systemic environment of the old animals. We also show that this lineage conversion is associated with an activation of the canonical Wnt signaling pathway in aged myogenic progenitors and can be suppressed by Wnt inhibitors. Furthermore, components of serum from aged mice that bind to the Frizzled family of proteins, which are Wnt receptors, may account for the elevated Wnt signaling in aged cells. These results indicate that the Wnt signaling pathway may play a critical role in tissue-specific stem cell aging and an increase in tissue fibrosis with age.