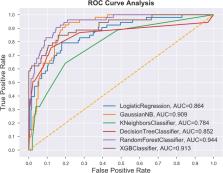 A formal risk assessment for identifying high-risk patients is essential in clinical practice and promoted in guidelines for the management of anterior acute myocardial infarction. In this study, we sought to evaluate the performance of different machine learning models in predicting the 1-year mortality rate of anterior ST-segment elevation myocardial infarction (STEMI) patients and to compare the utility of these models to the conventional Global Registry of Acute Coronary Events (GRACE) risk scores. We enrolled all of the patients aged >18 years with discharge diagnoses of anterior STEMI in the Western China Hospital, Sichuan University, from January 2011 to January 2017. A total of 1244 patients were included in this study. The mean patient age was 63.8±12.9 years, and the proportion of males was 78.4%. The majority (75.18%) received revascularization therapy. In the prediction of the 1-year mortality rate, the areas under the curve (AUCs) of the receiver operating characteristic curves (ROCs) of the six models ranged from 0.709 to 0.942. Among all models, XGBoost achieved the highest accuracy (92%), specificity (99%) and f1 score (0.72) for predictions with the full variable model. After feature selection, XGBoost still obtained the highest accuracy (93%), specificity (99%) and f1 score (0.73). In conclusion, machine learning algorithms can accurately predict the rate of death after a 1-year follow-up of anterior STEMI, especially the XGBoost model.

A T Gosselink,  Edwin van den Oord,  Jan Paul Ottervanger … (2009)
Predictors of 30-day mortality may differ from predictors of mortality at 1 year among 30-day survivors of ST-elevation myocardial infarction (STEMI) treated with primary percutaneous coronary intervention (PCI). We aimed to evaluate the predictors of 30-day and 1-year mortality in unselected patients with STEMI treated with PCI. Individual patient data from 4732 patients with STEMI, who were treated with primary PCI during an 11-year study period, were recorded prospectively. Patient characteristics, 30-day, and 1-year outcome were evaluated. At 30-day follow-up, 219 patients (4.6%) died; and out of the 4513 30-day survivors, 109 patients (2.8%) died at 1 year. Patients who died were older, had a higher risk profile. Higher rates of Killip class greater than 2 on admission, multivessel disease, and, more often, lower left ventricular ejection fraction were observed in patients who died. Mortality rate was 7.6% at 30 days among the females when compared with 3.7 among the males, P value less than 0.001. Age and sex-adjusted multivariate analysis revealed that previous myocardial infarction, diabetes, Killip class greater than 2, post-PCI thrombolysis in myocardial infarction flow less than 3, and left ventricular ejection fraction less than 30% were strong predictors of both 30-day and 1-year mortality. However, multivessel disease, anterior myocardial infarct location and in-hospital reinfarction, ischemic time, and pre-PCI thrombolysis in myocardial infarction flow less than 3 were particularly strong predictors of 30-day mortality. Despite the fact that most characteristics of 30-day and 1-year mortality among 30-day survivors are similar, we found that variables that affect mortality beyond the acute phase may not necessarily be the same as those that influence early mortality.

Prediction and Risk Stratification of Kidney Outcomes in IgA Nephropathy