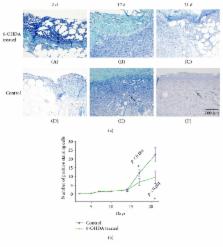 Previous studies focused on the effects of sympathetic denervation with 6-hydroxydopamine (6-OHDA) on nondiabetic wounds, but the effects of 6-OHDA on diabetic wounds have not been previously reported. In this study, treated mice received intraperitoneal 6-OHDA, and control mice received intraperitoneal injections of normal saline. Full-thickness wounds were established on the backs of mice. The wounds were sectioned (four mice per group) for analysis at 2, 5, 7, 10, 14, 17, and 21 days after injury. The wound areas in the control group were larger than those in the treatment group. Histological scores for epidermal and dermal regeneration were reduced in the 6-OHDA-treated group on day 21. The mast cells (MCs) in each field decreased after sympathectomy on days 17 and 21. The expression levels of norepinephrine, epidermal growth factor (EGF), interleukin-1 beta, NG2 proteoglycan, and desmin in the treatment group were less than those in the control group. In conclusion, 6-OHDA delays reepithelialization during wound healing in diabetic mice by decreasing EGF, but increases wound contraction by reducing IL-1 β levels and the number of MCs. Besides, 6-OHDA led to reduced pericyte proliferation in diabetic wounds, which might explain the vascular dysfunction after sympathetic nerve loss in diabetic wounds.

Thomas Wieland,  Akiyoshi Uemura,  Christiane Vettel … (2012)
Angiopoietin-2 (ANG-2) is a key regulator of angiogenesis that exerts context-dependent effects on ECs. ANG-2 binds the endothelial-specific receptor tyrosine kinase 2 (TIE2) and acts as a negative regulator of ANG-1/TIE2 signaling during angiogenesis, thereby controlling the responsiveness of ECs to exogenous cytokines. Recent data from tumors indicate that under certain conditions ANG-2 can also promote angiogenesis. However, the molecular mechanisms of dual ANG-2 functions are poorly understood. Here, we identify a model for the opposing roles of ANG-2 in angiogenesis. We found that angiogenesis-activated endothelium harbored a subpopulation of TIE2-negative ECs (TIE2lo). TIE2 expression was downregulated in angiogenic ECs, which abundantly expressed several integrins. ANG-2 bound to these integrins in TIE2lo ECs, subsequently inducing, in a TIE2-independent manner, phosphorylation of the integrin adaptor protein FAK, resulting in RAC1 activation, migration, and sprouting angiogenesis. Correspondingly, in vivo ANG-2 blockade interfered with integrin signaling and inhibited FAK phosphorylation and sprouting angiogenesis of TIE2lo ECs. These data establish a contextual model whereby differential TIE2 and integrin expression, binding, and activation control the role of ANG-2 in angiogenesis. The results of this study have immediate translational implications for the therapeutic exploitation of angiopoietin signaling.

William B. Stallcup,  K Grako,  U Ozerdem … (2001)
Immunofluorescence mapping demonstrates that the NG2 proteoglycan is invariably expressed by the mural cell component of mouse neovascular structures. This pattern is independent of the developmental mechanism responsible for formation of the vasculature (vasculogenesis or angiogenesis). Thus, NG2 is expressed in the embryonic heart by cardiomyocytes, in developing macrovasculature by smooth muscle cells, and in nascent microvessels by vascular pericytes. Due to the scarcity of proven markers for developing pericytes, NG2 is especially useful for identification of this cell type. The utility of NG2 as a pericyte marker is illustrated by two observations. First, pericytes are associated with endothelial tubes at an early point in microvessel development. This early interaction between pericytes and endothelial cells has important implications for the role of pericytes in the development and stabilization of microvascular tubes. Second, the pericyte to endothelial cell ratio in developing capillaries varies from tissue to tissue. Because the extent of pericyte investment is likely to affect the physical properties of the vessel in question, it is important to understand the mechanisms that control this process. Additional insight into these and other aspects of vascular morphogenesis should be possible through use of NG2 as a mural cell marker. Copyright 2001 Wiley-Liss, Inc.