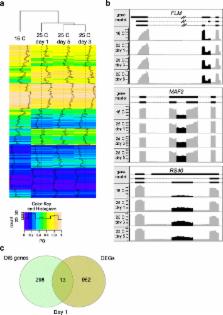 Global warming severely affects flowering time and reproductive success of plants. Alternative splicing of pre-messenger RNA (mRNA) is an important mechanism underlying ambient temperature-controlled responses in plants, yet its regulation is poorly understood. An increase in temperature promotes changes in plant morphology as well as the transition from the vegetative to the reproductive phase in Arabidopsis thaliana via changes in splicing of key regulatory genes. Here we investigate whether a particular histone modification affects ambient temperature-induced alternative splicing and flowering time.

Our results show a key role for the histone mark H3K36me3 in splicing regulation and plant plasticity to fluctuating ambient temperature. Our findings open new perspectives for the breeding of crops that can better cope with environmental changes due to climate change.

A genomic view of alternative splicing.

Phytochromes function as thermosensors in Arabidopsis.

Jae-Hoon Jung, Mirela Domijan, Cornelia Klose … (2016)
Plants are responsive to temperature, and some species can distinguish differences of 1°C. In Arabidopsis, warmer temperature accelerates flowering and increases elongation growth (thermomorphogenesis). However, the mechanisms of temperature perception are largely unknown. We describe a major thermosensory role for the phytochromes (red light receptors) during the night. Phytochrome null plants display a constitutive warm-temperature response, and consistent with this, we show in this background that the warm-temperature transcriptome becomes derepressed at low temperatures. We found that phytochrome B (phyB) directly associates with the promoters of key target genes in a temperature-dependent manner. The rate of phyB inactivation is proportional to temperature in the dark, enabling phytochromes to function as thermal timers that integrate temperature information over the course of the night.

Maria Koini, Liz Alvey, Trudie Allen … (2009)
Exposure of Arabidopsis plants to high temperature (28 degrees C) results in a dramatic change in plant development. Responses to high temperature include rapid extension of plant axes, leaf hyponasty, and early flowering. These phenotypes parallel plant responses to the threat of vegetational shade and have been shown to involve the hormone auxin. In this work, we demonstrate that high temperature-induced architectural adaptations are mediated through the bHLH transcriptional regulator PHYTOCHROME INTERACTING FACTOR 4 (PIF4). Roles for PIF4 have previously been established in both light and gibberellin (GA) signaling, through interactions with phytochromes and DELLA proteins, respectively. Mutants deficient in PIF4 do not display elongation responses or leaf hyponasty upon transfer to high temperature. High temperature-mediated induction of the auxin-responsive gene IAA29 is also abolished in these plants. An early flowering response to high temperature is maintained in pif4 mutants, suggesting that architectural and flowering responses operate via separate signaling pathways. The role of PIF4 in temperature signaling does not, however, appear to operate through interaction with either phytochrome or DELLA proteins, suggesting the existence of a novel regulatory mechanism. We conclude that PIF4 is an important component of plant high temperature signaling and integrates multiple environmental cues during plant development.