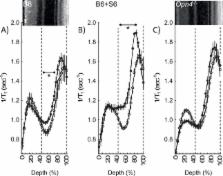 In humans, rodents, and pigeons, the dark → light transition signals nonretinal brain tissue to increase choroidal thickness, a major control element of choroidal blood flow, and thus of photoreceptor and retinal pigment epithelium function. However, it is unclear which photopigments in the retina relay the light signal to the brain. Here, we test the hypothesis that melanopsin ( Opn4)-regulated phototransduction modulates light-evoked choroidal thickness expansion in mice.

Two-month-old C57Bl/6 wild-type (B6), 4- to 5-month-old C57Bl/6/129S6 wild-type (B6 + S6), and 2-month-old melanopsin knockout ( Opn4 −/−) on a B6 + S6 background were studied. Retinal anatomy was evaluated in vivo by optical coherence tomography and MRI. Choroidal thickness in dark and light were measured by diffusion-weighted MRI. Rod cell L-type calcium channel (LTCC) function in dark and light (manganese-enhanced MRI [MEMRI]) was also measured.

S. Hattar,  H. Liao,  K.-W. Yau … (2002)
The primary circadian pacemaker, in the suprachiasmatic nucleus (SCN) of the mammalian brain, is photoentrained by light signals from the eyes through the retinohypothalamic tract. Retinal rod and cone cells are not required for photoentrainment. Recent evidence suggests that the entraining photoreceptors are retinal ganglion cells (RGCs) that project to the SCN. The visual pigment for this photoreceptor may be melanopsin, an opsin-like protein whose coding messenger RNA is found in a subset of mammalian RGCs. By cloning rat melanopsin and generating specific antibodies, we show that melanopsin is present in cell bodies, dendrites, and proximal axonal segments of a subset of rat RGCs. In mice heterozygous for tau-lacZ targeted to the melanopsin gene locus, beta-galactosidase-positive RGC axons projected to the SCN and other brain nuclei involved in circadian photoentrainment or the pupillary light reflex. Rat RGCs that exhibited intrinsic photosensitivity invariably expressed melanopsin. Hence, melanopsin is most likely the visual pigment of phototransducing RGCs that set the circadian clock and initiate other non-image-forming visual functions.

Debora Nickla,  Josh Wallman (2010)
The choroid of the eye is primarily a vascular structure supplying the outer retina. It has several unusual features: It contains large membrane-lined lacunae, which, at least in birds, function as part of the lymphatic drainage of the eye and which can change their volume dramatically, thereby changing the thickness of the choroid as much as four-fold over a few days (much less in primates). It contains non-vascular smooth muscle cells, especially behind the fovea, the contraction of which may thin the choroid, thereby opposing the thickening caused by expansion of the lacunae. It has intrinsic choroidal neurons, also mostly behind the central retina, which may control these muscles and may modulate choroidal blood flow as well. These neurons receive sympathetic, parasympathetic and nitrergic innervation. The choroid has several functions: Its vasculature is the major supply for the outer retina; impairment of the flow of oxygen from choroid to retina may cause Age-Related Macular Degeneration. The choroidal blood flow, which is as great as in any other organ, may also cool and warm the retina. In addition to its vascular functions, the choroid contains secretory cells, probably involved in modulation of vascularization and in growth of the sclera. Finally, the dramatic changes in choroidal thickness move the retina forward and back, bringing the photoreceptors into the plane of focus, a function demonstrated by the thinning of the choroid that occurs when the focal plane is moved back by the wearing of negative lenses, and, conversely, by the thickening that occurs when positive lenses are worn. In addition to focusing the eye, more slowly than accommodation and more quickly than emmetropization, we argue that the choroidal thickness changes also are correlated with changes in the growth of the sclera, and hence of the eye. Because transient increases in choroidal thickness are followed by a prolonged decrease in synthesis of extracellular matrix molecules and a slowing of ocular elongation, and attempts to decouple the choroidal and scleral changes have largely failed, it seems that the thickening of the choroid may be mechanistically linked to the scleral synthesis of macromolecules, and thus may play an important role in the homeostatic control of eye growth, and, consequently, in the etiology of myopia and hyperopia. Copyright 2009 Elsevier Ltd. All rights reserved.

Central projections of melanopsin-expressing retinal ganglion cells in the mouse.

J Tung,  Samer Hattar,  Wai-Lok Yau … (2006)
A rare type of ganglion cell in mammalian retina is directly photosensitive. These novel retinal photoreceptors express the photopigment melanopsin. They send axons directly to the suprachiasmatic nucleus (SCN), intergeniculate leaflet (IGL), and olivary pretectal nucleus (OPN), thereby contributing to photic synchronization of circadian rhythms and the pupillary light reflex. Here, we sought to characterize more fully the projections of these cells to the brain. By targeting tau-lacZ to the melanopsin gene locus in mice, ganglion cells that would normally express melanopsin were induced to express, instead, the marker enzyme beta-galactosidase. Their axons were visualized by X-gal histochemistry or anti-beta-galactosidase immunofluorescence. Established targets were confirmed, including the SCN, IGL, OPN, ventral division of the lateral geniculate nucleus (LGv), and preoptic area, but the overall projections were more widespread than previously recognized. Targets included the lateral nucleus, peri-supraoptic nucleus, and subparaventricular zone of the hypothalamus, medial amygdala, margin of the lateral habenula, posterior limitans nucleus, superior colliculus, and periaqueductal gray. There were also weak projections to the margins of the dorsal lateral geniculate nucleus. Co-staining with the cholera toxin B subunit to label all retinal afferents showed that melanopsin ganglion cells provide most of the retinal input to the SCN, IGL, and lateral habenula and much of that to the OPN, but that other ganglion cells do contribute at least some retinal input to these targets. Staining patterns after monocular enucleation revealed that the projections of these cells are overwhelmingly crossed except for the projection to the SCN, which is bilaterally symmetrical. (c) 2006 Wiley-Liss, Inc.