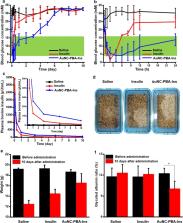 Diabetes is one of the biggest medical challenges worldwide. The key to efficiently treat type 1 diabetes is to accurately inject insulin according to the blood glucose levels. In this study, we aimed to develop an intelligent insulin-releasing gold nanocluster system that responds to environmental glucose concentrations.

We employed gold nanoclusters (AuNCs) as a novel carrier nanomaterial by taking advantage of their high drug-loading capacity. We prepared AuNCs in the protection of bovine serum albumin, and we decorated AuNCs with 3-aminophenylboronic acid (PBA) as a glucose-responsive factor. Then we grafted insulin onto the surface to obtain the glucose-responsive insulin-releasing system, AuNC-PBA-Ins complex. The AuNC-PBA-Ins complex exhibited high sensitivity to glucose concentration, and rapidly released insulin in high glucose concentration in vitro. In the type 1 diabetic mouse model in vivo, the AuNC-PBA-Ins complex effectively released insulin and regulated blood glucose level in the normoglycemic state for up to 3 days.

Color test for detection of free terminal amino groups in the solid-phase synthesis of peptides.