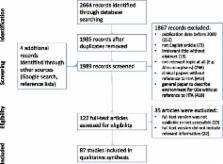 In case of orphan drugs applicability of the standard health technology assessment (HTA) process is limited due to scarcity of good clinical and health economic evidence. Financing these premium priced drugs is more controversial in the Central and Eastern European (CEE) region where the public funding resources are more restricted, and health economic justification should be an even more important aspect of policy decisions than in higher income European countries.

To explore and summarize the recent scientific evidence on value drivers related to the health technology assessment of ODs with a special focus on the perspective of third party payers in CEE countries. The review aims to list all potentially relevant value drivers in the reimbursement process of orphan drugs.

A systematic literature review was performed; PubMed and Scopus databases were systematically searched for relevant publications until April 2015. Extracted data were summarized along key HTA elements.

From the 2664 identified publications, 87 contained relevant information on the evaluation criteria of orphan drugs, but only 5 had direct information from the CEE region. The presentation of good clinical evidence seems to play a key role especially since this should be the basis of cost-effectiveness analyses, which have more importance in resource-constrained economies. Due to external price referencing of pharmaceuticals, the relative budget impact of orphan drugs is expected to be higher in CEE than in Western European (WE) countries unless accessibility of patients remains more limited in poorer European regions. Equity principles based on disease prevalence and non-availability of alternative treatment options may increase the price premium, however, societies must have some control on prices and a rationale based on multiple criteria in reimbursement decisions.

The evaluation of orphan medicines should include multiple criteria to appropriately measure the clinical added value of orphan drugs. The search found only a small number of studies coming from CEE, therefore European policies on orphan drugs may be based largely on experiences in WE countries. More research should be done in the future in CEE because financing high-priced orphan drugs involves a greater burden for these countries.

Rare diseases, orphan drugs and their regulation: questions and misconceptions.

Erik Tambuyzer (2010)
Sustained advocacy efforts driven by patients' organizations to make rare diseases a health priority have led to regulatory and economic incentives for industry to develop drugs for these diseases, known as orphan drugs. These incentives, enacted in regulations first introduced in the United States in 1983 and later in Japan, Europe and elsewhere, have resulted in substantial improvements in the treatment for patients with a range of rare diseases. However, the advent of orphan drug development has also triggered several questions, from the definition of rarity to the pricing of orphan drugs and their impact on health-care systems. This article provides an industry perspective on some of the common questions and misconceptions related to orphan drug development and its regulation, with the aim of facilitating future progress in the field.

Martina Garau,  Alastair Kent,  Jon Sussex … (2013)
To pilot the use of multicriteria decision analysis to establish and apply a framework of weighted attributes to value orphan medicinal products. Literature searches on the natural history and burden of 40 rare diseases and of how payers assess treatment value and three workshops with, respectively, GlaxoSmithKline managers working on orphan medicinal products, European Union clinical and health economics experts, and representatives of rare diseases patient groups in the European Union. Eight nonmonetary attributes were identified and weights agreed: four concern the disease being treated and four the treatment itself. About half of the weight went to attributes of the disease treated and half to attributes of the treatment. Patient group representatives gave greater weight than did the experts to patients' and carers' quality of daily life. The multicriteria decision analysis approach piloted works and could be developed for use by payers and health technology assessment bodies. © 2013 International Society for Pharmacoeconomics and Outcomes Research (ISPOR) Published by International Society for Pharmacoeconomics and Outcomes Research (ISPOR) All rights reserved.

Orphan drugs and the NHS: should we value rarity?