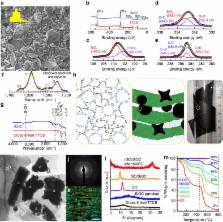 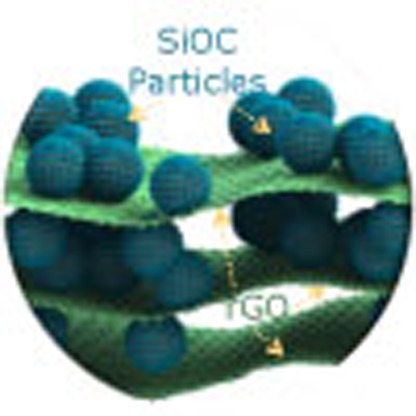 Most high-loading silicon-based anodes for lithium-ion batteries suffer from low efficiency and volumetric capacity. Here, the authors show that a paper-like electrode of silicon oxycarbide glass and graphene at mass loading of >2 mg cm −2 can efficiently deliver high energy density for over 1,000 cycles.

Dehong Hu,  Fu-Jun Liu,  Donghai Wang … (2009)
We used anionic sulfate surfactants to assist the stabilization of graphene in aqueous solutions and facilitate the self-assembly of in situ grown nanocrystalline TiO2, rutile and anatase, with graphene. These nanostructured TiO2-graphene hybrid materials were used for investigation of Li-ion insertion properties. The hybrid materials showed significantly enhanced Li-ion insertion/extraction in TiO2. The specific capacity was more than doubled at high charge rates, as compared with the pure TiO2 phase. The improved capacity at high charge-discharge rate may be attributed to increased electrode conductivity in the presence of a percolated graphene network embedded into the metal oxide electrodes.

Itaru Honma,  EunJoo Yoo,  Seung Leal Paek (2008)
To fabricate nanoporous electrode materials with delaminated structure, the graphene nanosheets (GNS) in the ethylene glycol solution were reassembled in the presence of rutile SnO(2) nanoparticles. According to the TEM analysis, the graphene nanosheets are homogeneously distributed between the loosely packed SnO(2) nanoparticles in such a way that the nanoporous structure with a large amount of void spaces could be prepared. The obtained SnO(2)/GNS exhibits a reversible capacity of 810 mAh/g; furthermore, its cycling performance is drastically enhanced in comparison with that of the bare SnO(2) nanoparticle. After 30 cycles, the charge capacity of SnO(2)/GNS still remained 570 mAh/g, that is, about 70% retention of the reversible capacity, while the specific capacity of the bare SnO(2) nanoparticle on the first charge was 550 mAh/g, dropping rapidly to 60 mAh/g only after 15 cycles. The dimensional confinement of tin oxide nanoparticles by the surrounding GNS limits the volume expansion upon lithium insertion, and the developed pores between SnO(2) and GNS could be used as buffered spaces during charge/discharge, resulting in the superior cyclic performances.