Variability in Echolocation Call Intensity in a Community of Horseshoe Bats: A Role for Resource Partitioning or Communication? 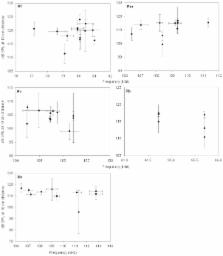 Only recently data on bat echolocation call intensities is starting to accumulate. Yet, intensity is an ecologically crucial parameter, as it determines the extent of the bats' perceptual space and, specifically, prey detection distance. Interspecifically, we thus asked whether sympatric, congeneric bat species differ in call intensities and whether differences play a role for niche differentiation. Specifically, we investigated whether R. mehelyi that calls at a frequency clearly above what is predicted by allometry, compensates for frequency-dependent loss in detection distance by using elevated call intensity. Maximum echolocation call intensities might depend on body size or condition and thus be used as an honest signal of quality for intraspecific communication. We for the first time investigated whether a size-intensity relation is present in echolocating bats.

We measured maximum call intensities and frequencies for all five European horseshoe bat species. Maximum intensity differed among species largely due to R. euryale. Furthermore, we found no compensation for frequency-dependent loss in detection distance in R. mehelyi. Intraspecifically, there is a negative correlation between forearm lengths and intensity in R. euryale and a trend for a negative correlation between body condition index and intensity in R. ferrumequinum. In R. hipposideros, females had 8 dB higher intensities than males. There were no correlations with body size or sex differences and intensity for the other species.

Based on call intensity and frequency measurements, we estimated echolocation ranges for our study community. These suggest that intensity differences result in different prey detection distances and thus likely play some role for resource access.

It is interesting and at first glance counter-intuitive that, where a correlation was found, smaller bats called louder than large individuals. Such negative relationship between size or condition and vocal amplitude may indicate an as yet unknown physiological or sexual selection pressure.

Echolocating Bats Cry Out Loud to Detect Their Prey

Annemarie Surlykke,  Elisabeth K. V. Kalko (2008)
Echolocating bats have successfully exploited a broad range of habitats and prey. Much research has demonstrated how time-frequency structure of echolocation calls of different species is adapted to acoustic constraints of habitats and foraging behaviors. However, the intensity of bat calls has been largely neglected although intensity is a key factor determining echolocation range and interactions with other bats and prey. Differences in detection range, in turn, are thought to constitute a mechanism promoting resource partitioning among bats, which might be particularly important for the species-rich bat assemblages in the tropics. Here we present data on emitted intensities for 11 species from 5 families of insectivorous bats from Panamá hunting in open or background cluttered space or over water. We recorded all bats in their natural habitat in the field using a multi-microphone array coupled with photographic methods to assess the bats' position in space to estimate emitted call intensities. All species emitted intense search signals. Output intensity was reduced when closing in on background by 4–7 dB per halving of distance. Source levels of open space and edge space foragers (Emballonuridae, Mormoopidae, Molossidae, and Vespertilionidae) ranged between 122–134 dB SPL. The two Noctilionidae species hunting over water emitted the loudest signals recorded so far for any bat with average source levels of ca. 137 dB SPL and maximum levels above 140 dB SPL. In spite of this ten-fold variation in emitted intensity, estimates indicated, surprisingly, that detection distances for prey varied far less; bats emitting the highest intensities also emitted the highest frequencies, which are severely attenuated in air. Thus, our results suggest that bats within a local assemblage compensate for frequency dependent attenuation by adjusting the emitted intensity to achieve comparable detection distances for prey across species. We conclude that for bats with similar hunting habits, prey detection range represents a unifying constraint on the emitted intensity largely independent of call shape, body size, and close phylogenetic relationships.

Echolocation behavior of big brown bats, Eptesicus fuscus, in the field and the laboratory.

A Surlykke,  C Moss (2000)
Echolocation signals were recorded from big brown bats, Eptesicus fuscus, flying in the field and the laboratory. In open field areas the interpulse intervals (IPI) of search signals were either around 134 ms or twice that value, 270 ms. At long IPI's the signals were of long duration (14 to 18-20 ms), narrow bandwidth, and low frequency, sweeping down to a minimum frequency (Fmin) of 22-25 kHz. At short IPI's the signals were shorter (6-13 ms), of higher frequency, and broader bandwidth. In wooded areas only short (6-11 ms) relatively broadband search signals were emitted at a higher rate (avg. IPI= 122 ms) with higher Fmin (27-30 kHz). In the laboratory the IPI was even shorter (88 ms), the duration was 3-5 ms, and the Fmin 30- 35 kHz, resembling approach phase signals of field recordings. Excluding terminal phase signals, all signals from all areas showed a negative correlation between signal duration and Fmin, i.e., the shorter the signal, the higher was Fmin. This correlation was reversed in the terminal phase of insect capture sequences, where Fmin decreased with decreasing signal duration. Overall, the signals recorded in the field were longer, with longer IPI's and greater variability in bandwidth than signals recorded in the laboratory.

Publisher ID: 10-PONE-RA-16949R1
DOI: 10.1371/journal.pone.0012842
PMC ID: 2941460
PubMed ID: 20862252
Copyright statement: Schuchmann, Siemers. This is an open-access article distributed under the terms of the Creative Commons Attribution License, which permits unrestricted use, distribution, and reproduction in any medium, provided the original author and source are credited.