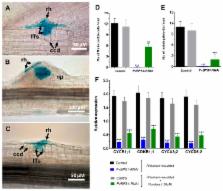 BYPASS1 ( BPS1), which is a well-conserved gene in plants, is required for normal root and shoot development. In the absence of BPS1 gene function, Arabidopsis overproduces a mobile signalling compound (the BPS1 signal) in roots, and this transmissible signal arrests shoot growth and causes abnormal root development. In addition to the shoot and root meristem activities, the legumes also possess transient meristematic activity in root cortical cells during Rhizobium symbiosis. We explored the role of Phaseolus vulgaris BPS1 during nodule primordium development using an RNA-interference (RNAi) silencing approach. Our results show that upon Rhizobium infection, the PvBPS1-RNAi transgenic roots failed to induce cortical cell divisions without affecting the rhizobia-induced root hair curling and infection thread formation. The transcript accumulation of early nodulin genes, cell cyclins, and cyclin-dependent kinase genes was affected in RNAi lines. Interestingly, the PvBPS1-RNAi root nodule phenotype was partially rescued by exogenous application of fluridone, a carotenoid biosynthesis inhibitor, which was used because the carotenoids are precursors of BPS1 signalling molecules. Furthermore, we show that the PvBPS1 promoter was active in the nodule primordia. Together, our data show that PvBPS1 plays a vital role in the induction of meristematic activity in root cortical cells and in the establishment of nodule primordia during Phaseolus-Rhizobium symbiosis.

Jiri Friml,  Ben Scheres,  Ikram Blilou … (2005)
Local accumulation of the plant growth regulator auxin mediates pattern formation in Arabidopsis roots and influences outgrowth and development of lateral root- and shoot-derived primordia. However, it has remained unclear how auxin can simultaneously regulate patterning and organ outgrowth and how its distribution is stabilized in a primordium-specific manner. Here we show that five PIN genes collectively control auxin distribution to regulate cell division and cell expansion in the primary root. Furthermore, the joint action of these genes has an important role in pattern formation by focusing the auxin maximum and restricting the expression domain of PLETHORA (PLT) genes, major determinants for root stem cell specification. In turn, PLT genes are required for PIN gene transcription to stabilize the auxin maximum at the distal root tip. Our data reveal an interaction network of auxin transport facilitators and root fate determinants that control patterning and growth of the root primordium.