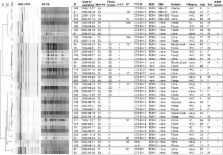 Transmission of extended-spectrum β-lactamase (ESBL)–producing Enterobacteriaceae in households outweighs nosocomial dissemination in the non-outbreak setting. Importation of ESBL producers into the hospitals is as frequent as transmission during hospital stay. ESBL– Klebsiella pneumoniae might be more efficiently transmitted within the hospital than ESBL– Escherichia coli.

Background . Studies about transmission rates of extended-spectrum β-lactamase (ESBL)–producing Enterobacteriaceae in hospitals and households are scarce.

Methods . Eighty-two index patients with new carriage of ESBL-producing Escherichia coli (ESBL- Ec; n = 72) or ESBL-producing Klebsiella pneumoniae (ESBL- Kp; n = 10) and their hospital (n = 112) and household (n = 96) contacts were studied prospectively from May 2008 through September 2010. Isolates were phenotypically and molecularly characterized (sequencing of bla genes, repetitive extragenic palindromic polymerase chain reaction, pulse-field gel electrophoresis, and multilocus sequence typing). Transmission was defined as carriage of a clonally-related ESBL producer with identical bla ESBL gene(s) in the index patient and his or her contact(s).

Emergence of Enterobacteriaceae producing extended-spectrum beta-lactamases (ESBLs) in the community.

Kevin B Laupland,  Johann D D Pitout,  Laurent Poirel … (2005)
Enterobacteriaceae, especially Klebsiella spp. producing extended-spectrum beta-lactamases (ESBLs) such as SHV and TEM types, have been established since the 1980s as a major cause of hospital-acquired infections. Appropriate infection control practices have largely prevented the dissemination of these bacteria within many hospitals, although outbreaks have been reported. However, during the late 1990s and 2000s, Enterobacteriaceae (mostly Escherichia coli) producing novel ESBLs, the CTX-M enzymes, have been identified predominantly from the community as a cause of urinary tract infections. Resistance to other classes of antibiotics, especially the fluoroquinolones, is often associated with ESBL-producing organisms. Many clinical laboratories are still not aware of the importance of screening for ESBL-producing Enterobacteriaceae originating from the community. A heightened awareness of these organisms by clinicians and enhanced testing by laboratories, including molecular surveillance studies, is required to reduce treatment failures, to limit their introduction into hospitals and to prevent the spread of these emerging pathogens within the community.

Escherichia coli sequence type ST131 as the major cause of serious multidrug-resistant E. coli infections in the United States.

Mariana Castanheira,  Connie Clabots,  Michael Kuskowski … (2010)
Escherichia coli sequence type ST131 (O25:H4), associated with the CTX-M-15 extended-spectrum beta-lactamase, has emerged internationally as a multidrug-resistant pathogen but has received little attention in the United States. From the SENTRY and Meropenem Yearly Susceptibility Test Information Collection (MYSTIC) surveillance programs, 127 E. coli clinical isolates from hospitalized patients across the United States in 2007, stratified by extended-spectrum cephalosporin and fluoroquinolone phenotype and bla(CTX-M-15) genotype, were assessed for phylogenetic group, ST131 status, susceptibility profile, virulence genotype, gyrA and parC sequence, and pulsed-field gel electrophoresis profile. The 54 identified ST131 isolates (all fluoroquinolone resistant) accounted for an estimated 17% of the source populations, including 67%-69% of isolates resistant to extended-spectrum cephalosporins or fluoroquinolones, 55% of those resistant to both fluoroquinolones and trimethoprim-sulfamethoxazole, and 52% of multidrug-resistant isolates. Their distinctive virulence profiles were more extensive compared with other antimicrobial-resistant isolates but similarly extensive compared with antimicrobial-susceptible isolates. Pulsed-field profiling suggested ongoing dissemination among locales, with concentration of bla(CTX-M-15) within specific ST131 lineages. A historical ST131 isolate lacked the 2007 ST131 isolates' conserved fluoroquinolone resistance-associated single-nucleotide polymorphisms in gyrA and parC. A single E. coli clonal group, ST131, probably caused the most significantly antimicrobial-resistant E. coli infections in the United States in 2007, thereby constituting an important new public health threat. Enhanced virulence and/or antimicrobial resistance compared with other E. coli, plus ongoing dissemination among locales, may underlie ST131's success. Urgent investigation of the sources and transmission pathways of ST131 is needed to inform mitigation efforts.