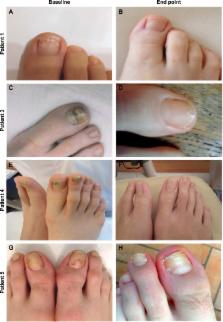 Distal and lateral onychomycoses are the most frequent forms of onychomycosis, causing subungual hyperkeratosis that usually limits local penetration of antimycotic drugs. Tazarotene exerts anti-inflammatory and immune-modulating activities toward both infective agents and damaged keratinocytes. Given the well-documented efficacy of tazarotene on hyperkeratotic nail psoriasis, we investigated its therapeutic use in onychomycosis.

We designed a preliminary open clinical trial in patients affected by distal and lateral subungual onychomycosis of the toenails and verified the fungistatic activity of tazarotene in vitro. Fifteen patients were treated with topical tazarotene 0.1% gel once per day for 12 weeks. Mycological cultures and potassium hydroxide stains of nail samples were performed at the beginning and at the end of the study. Treatment was considered effective when clinical healing and negative mycological culture were obtained. Onycholysis, nail bed discoloration, and subungual hyperkeratosis were measured using standardized methodologies and analyzed by means of Mann–Whitney test and analysis of variance. Fungistatic activity of tazarotene was evaluated by disk diffusion assay.

Six patients (40%) reached a mycological cure on target nail samples already after 4 weeks of treatment. Complete clinical healing and negative cultures were reached in all patients at week 12, with a significant improvement of all clinical parameters of the infected nails. Disk diffusion assay after 48 hours of incubation with tazarotene solution showed a central area of inhibition in all examined fungal cultures.

Our results documented a good clinical outcome using topical tazarotene 0.1% gel in distal and lateral subungual onychomycosis and its fungistatic activity of tazarotene in vitro. The majority of patients appeared cured at a 6-month follow-up. The efficacy and safety of tazarotene must be confirmed on a larger number of patients, although already documented in nail psoriasis patients often affected by onychomycosis.

Boni Elewski (1998)
Although not life-threatening, onychomycosis (a fungal infection of the nail, usually caused by a dermatophyte) constitutes an important public health problem because of its high prevalence (about 10% of the U.S. population) and associated morbidity. The disease can have certain negative consequences for patients, such as pain, and can potentially undermine work and social lives. This review discusses the etiology, classification, diagnosis, and treatment of onychomycosis. Four types of onychomycosis are recognized based on the site and pattern of fungal invasion. Dermatophyte fungi are the predominant pathogens, but yeasts (especially Candida albicans) and nondermatophyte molds may also be implicated. Accurate diagnosis requires direct microscopy and fungal culture. The differential diagnosis includes psoriasis, lichen planus, onychogryphosis, and nail trauma. Onychomycosis is more difficult to treat than most dermatophytoses because of the inherent slow growth of the nail. Older antifungal agents (ketoconazole and griseofulvin) are unsuitable for onychomycosis because of their relatively poor efficacy and potential adverse effects. Three recently developed antimycotic agents (fluconazole, itraconazole, and terbinafine) offer high cure rates and good safety profiles. In addition, the short treatment times (< 3 months) and intermittent dosing schedules are likely to enhance compliance and reduce the costs of therapy.

Ciclopirox: recent nonclinical and clinical data relevant to its use as a topical antimycotic agent.

F Mailland,  Daniela Monti,  Alessandro Subissi … (2010)
Ciclopirox is a topical antimycotic agent belonging to the chemical class of hydroxypyridones and not related to azoles or any other class of antifungal agents. Its antimicrobial profile includes nearly all of the clinically relevant dermatophytes, yeasts and moulds, and is therefore broader than that of most other antimycotics. It is also active against certain frequently azole-resistant Candida species and against some bacteria. The mechanism of action of ciclopirox is different from that of other topical antifungal drugs, which generally act through ergosterol inhibition. The high affinity of ciclopirox for trivalent metal cations, resulting in inhibition of the metal-dependent enzymes that are responsible for the degradation of peroxides within the fungal cell, appears to be the major determinant of its antimicrobial activity. This unique and multilevel mechanism of action provides a very low potential for the development of resistance in pathogenic fungi, with cases of resistance rarely reported. Ciclopirox also displays mild anti-inflammatory effects in biochemical and pharmacological models; effects also shown in small clinical studies. Scavenging of reactive oxygen species released from inflammatory cells is a likely contributor to these anti-inflammatory effects. Ciclopirox, and its olamine salt, is available in multiple topical formulations, suitable for administration onto the skin and nails and into the vagina. The pharmaceutical forms most widely investigated are 1% ciclopirox olamine cream and 8% ciclopirox acid nail lacquer, but lotion, spray, shampoo, pessary, solution, gel and douche formulations have also been used. Ciclopirox penetrates into the deep layers of the skin, mucosal membranes and nail keratin, reaching concentrations exceeding the minimal fungicidal concentrations for most medically important fungi. A large number of clinical trials were and are still being performed with ciclopirox, starting in the early 1980s. Ciclopirox was first developed for fungal skin infections and vaginal candidiasis, and is currently well established in these indications. More recently, the drug has been clinically investigated in seborrhoeic dermatitis and onychomycosis, showing good efficacy and excellent tolerability. Emphasis in this review is given to a ciclopirox medicated nail lacquer, which is based on an original technology and has superior properties in terms of its affinity to keratin and nail permeation. It has been found to have superior efficacy and safety to another commercially available formulation in the treatment of onychomycosis. The safety features of ciclopirox are well known. The topical drug is devoid of systemic adverse reactions. Mild local reactions characterized by a burning sensation of the skin, irritation, redness, pain or pruritus, generally in less than 5% of treated patients, can be observed following skin and vaginal application. With nail application, the most common adverse event is the appearance of mild erythema in 5% of the treated population. As a general conclusion, although less effective than some oral antimycotic agents in various indications, ciclopirox compares very well in terms of the benefit/risk ratio due to its excellent tolerability and complete absence of serious adverse effects.

Iqbal Kaur,  B Kashyap,  P Bhalla (2015)
Onychomycosis is a fungal infection of nails caused by dermatophytes, yeasts or nondermatophyte molds and represents about 30% of mycotic cutaneous infections. Increasingly onychomycosis is being viewed as more than a mere cosmetic problem. In spite of improved personal hygiene and living environment, onychomycosis continues to spread and persist. The prevalence rate of onychomycosis is determined by age, predisposing factor, social class, occupation, climate, living environment and frequency of travel. Onychomycosis in immunocompromised patients can pose a more serious health problem. Dermatophytes are the most frequently implicated causative agents in onychomycosis. Previously regarded as contaminants, yeasts are now increasingly recognised as pathogens in fingernail infections, as are some moulds. Clinical diagnosis of onychomycosis is based on the patients' history; a physical examination, microscopy and culture of nail specimens. The treatment of onychomycosis has been attempted throughout the ages, but only in the last two decades have safe, effective systemic treatments been available for this chronic superficial fungal disease. Oral Griseofulvin and Ketoconazole; once the agents of choice for the treatment of onychomycosis, have been superseded by newer systemic compounds that have a higher cure and lower relapse rates, cause fewer side effects and are suitable for short-term dosing.