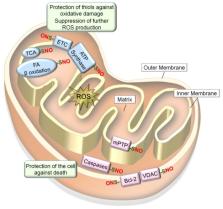 Nitric oxide (NO) is a highly reactive molecule, generated through metabolism of L-arginine by NO synthase (NOS). Abnormal NO levels in mammalian cells are associated with multiple human diseases, including cancer. Recent studies have uncovered that the NO signaling is compartmentalized, owing to the localization of NOS and the nature of biochemical reactions of NO, including S-nitrosylation. S-nitrosylation is a selective covalent post-translational modification adding a nitrosyl group to the reactive thiol group of a cysteine to form S-nitrosothiol (SNO), which is a key mechanism in transferring NO-mediated signals. While S-nitrosylation occurs only at select cysteine thiols, such a spatial constraint is partially resolved by transnitrosylation, where the nitrosyl moiety is transferred between two interacting proteins to successively transfer the NO signal to a distant location. As NOS is present in various subcellular locales, a stress could trigger concerted S-nitrosylation and transnitrosylation of a large number of proteins involved in divergent signaling cascades. S-nitrosylation is an emerging paradigm of redox signaling by which cells confer protection against oxidative stress.

S Legrand,  Geoffrey Gloire,  Jacques Piette (2006)
The transcription factor NF-kappaB plays a major role in coordinating innate and adaptative immunity, cellular proliferation, apoptosis and development. Since the discovery in 1991 that NF-kappaB may be activated by H(2)O(2), several laboratories have put a considerable effort into dissecting the molecular mechanisms underlying this activation. Whereas early studies revealed an atypical mechanism of activation, leading to IkappaBalpha Y42 phosphorylation independently of IkappaB kinase (IKK), recent findings suggest that H(2)O(2) activates NF-kappaB mainly through the classical IKK-dependent pathway. The molecular mechanisms leading to IKK activation are, however, cell-type specific and will be presented here. In this review, we also describe the effect of other ROS (HOCl and (1)O(2)) and reactive nitrogen species on NF-kappaB activation. Finally, we critically review the recent data highlighting the role of ROS in NF-kappaB activation by proinflammatory cytokines (TNF-alpha and IL-1beta) and lipopolysaccharide (LPS), two major components of innate immunity.

Ljubava D Zorova,  Vasily Popkov,  Egor Y Plotnikov … (2018)
The mitochondrial membrane potential (ΔΨm) generated by proton pumps (Complexes I, III and IV) is an essential component in the process of energy storage during oxidative phosphorylation. Together with the proton gradient (ΔpH), ΔΨm forms the transmembrane potential of hydrogen ions which is harnessed to make ATP. The levels of ΔΨm and ATP in the cell are kept relatively stable although there are limited fluctuations of both these factors that can occur reflecting normal physiological activity. However, sustained changes in both factors may be deleterious. A long-lasting drop or rise of ΔΨm vs normal levels may induce unwanted loss of cell viability and be a cause of various pathologies. Among other factors, ΔΨm plays a key role in mitochondrial homeostasis through selective elimination of dysfunctional mitochondria. It is also a driving force for transport of ions (other than H+) and proteins which are necessary for healthy mitochondrial functioning. We propose additional potential mechanisms for which ΔΨm is essential for maintenance of cellular health and viability and provide recommendations how to accurately measure ΔΨm in a cell and discuss potential sources of artifacts.

Gerd Bienert,  François Chaumont (2014)
Hydrogen peroxide (H2O2) is an important signaling compound that has recently been identified as a new substrate for several members of the aquaporin superfamily in various organisms. Evidence is emerging about the physiological significance of aquaporin-facilitated H2O2 diffusion.