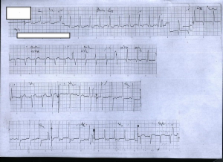 The potential of alcohol withdrawal to cause acute coronary events is an area that needs the urgent attention of clinicians and researchers.

We report the case of a 52-year-old heavy-alcohol-using Sri Lankan man who developed electocardiogram changes suggestive of an acute coronary event during alcohol withdrawal. Despite the patient being asymptomatic, subsequent echocardiogram showed evidence of ischemic myocardial dysfunction. We review the literature on precipitation of myocardial ischemia during alcohol withdrawal and propose possible mechanisms.

Alcohol withdrawal is a commonly observed phenomenon in hospitals. However, the number of cases reported in the literature of acute coronary events occurring during withdrawal is few. Many cases of acute ischemia or sudden cardiac deaths may be attributed to other well known complications of delirium tremens. This is an area needing the urgent attention of clinicians and epidemiologists.

B Adinoff,  I. Mefford,  M Linnoila … (1987)
Alcohol withdrawal syndrome is characterized by signs of overactivity of the sympathetic nervous system. Biochemical studies indicate that increased release of norepinephrine is associated with certain symptoms of alcohol withdrawal, and the severity of the withdrawal symptoms correlates positively with the amount of norepinephrine released. In the rat, the brain epinephrine concentration is reduced by alcohol, a phenomenon probably associated with both the intoxicating and rewarding effects of alcohol intake. Furthermore, intoxicating effects of alcohol can be reversed by inhibiting epinephrine synthesis in the rat brain. In this species, alcohol withdrawal is associated with profound depletion of epinephrine in the hypothalamus. When clonidine, a norepinephrine alpha-2-receptor agonist, was infused in alcoholics, these receptors were found to be subsensitive during alcohol withdrawal, and this subsensitivity may contribute to the syndrome. Repeated withdrawals may lead to "kindling" and thus further enhancement of noradrenergic overactivity. Pituitary responsiveness to corticotropin-releasing hormone, which is a central regulator of stress responses and increases the firing rate of brain noradrenergic neurons, is altered during alcohol withdrawal.

S Factor (1976)
A morphologic study of the small (50 to 200 micron) intramyocardial coronary arteries was performed. The cases chosen for study were selected from a relatively young group of patients without clinical evidence of alcoholic cardiomyopathy or pathologic evidence of large coronary artery disease, in order to evaluate alterations in the small vessels which could possibly be attributed to the chronic alcoholic state. Five basic vascular abnormalities were described. The most common alteration found in all nine cases was vascular wall edema (48 per cent), followed by perivascular fibrosis (42 per cent), vascular sclerosis (36 per cent), subendothelial humps (13 per cent), and vascular wall inflammation (11 per cent). The significance and pathogenesis of these changes were discussed. Primary endothelial cell damage was proposed as a common pathogenic mechanism for all five types of vascular abnormality. It was suggested that following endothelial damage, fluid and macromolecules penetrate into the vessel wall or into the perivascular space where, by incompletely understood processes, they induce vascular wall myocytes to produce collagen, elastin, and basement membrane-like substances. Evidence supporting this mechanism was derived from the common observation of vascular wall edema, from the occasional presence of erythrocytes and leukocytes within the vessel wall, and from experimental data in the literature. Several possible etiologic agents were implicated in the pathogenesis of endothelial and vessel wall injury. These included alcohol itself, acetaldehyde, biogenic amines, and magnesium deficiency. It is probable, however, that there are multiple etiologic factors which affect the small cardiac vessels of the chronic alcoholic. Finally, the proposal was advanced that the nonspecific pathology of the myocardium in chronic alcoholism may be a result of ischemia secondary to disease of the small intramyocardial coronary ateries.