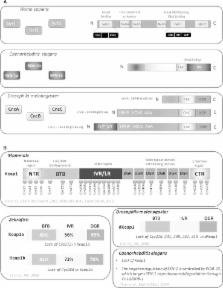 The multifunctional regulator nuclear factor erythroid 2-related factor (Nrf2) is considered not only as a cytoprotective factor regulating the expression of genes coding for anti-oxidant, anti-inflammatory and detoxifying proteins, but it is also a powerful modulator of species longevity. The vertebrate Nrf2 belongs to Cap ‘n’ Collar (Cnc) bZIP family of transcription factors and shares a high homology with SKN-1 from Caenorhabditis elegans or CncC found in Drosophila melanogaster. The major characteristics of Nrf2 are to some extent mimicked by Nrf2-dependent genes and their proteins including heme oxygenase-1 (HO-1), which besides removing toxic heme, produces biliverdin, iron ions and carbon monoxide. HO-1 and their products exert beneficial effects through the protection against oxidative injury, regulation of apoptosis, modulation of inflammation as well as contribution to angiogenesis. On the other hand, the disturbances in the proper HO-1 level are associated with the pathogenesis of some age-dependent disorders, including neurodegeneration, cancer or macular degeneration. This review summarizes our knowledge about Nrf2 and HO-1 across different phyla suggesting their conservative role as stress-protective and anti-aging factors.

A noncanonical mechanism of Nrf2 activation by autophagy deficiency: direct interaction between Keap1 and p62.

Alexandria Lau,  L Villeneuve,  Eileen White … (2010)
In response to stress, cells can utilize several cellular processes, such as autophagy, which is a bulk-lysosomal degradation pathway, to mitigate damages and increase the chances of cell survival. Deregulation of autophagy causes upregulation of p62 and the formation of p62-containing aggregates, which are associated with neurodegenerative diseases and cancer. The Nrf2-Keap1 pathway functions as a critical regulator of the cell's defense mechanism against oxidative stress by controlling the expression of many cellular protective proteins. Under basal conditions, Nrf2 is ubiquitinated by the Keap1-Cul3-E3 ubiquitin ligase complex and targeted to the 26S proteasome for degradation. Upon induction, the activity of the E3 ubiquitin ligase is inhibited through the modification of cysteine residues in Keap1, resulting in the stabilization and activation of Nrf2. In this current study, we identified the direct interaction between p62 and Keap1 and the residues required for the interaction have been mapped to 349-DPSTGE-354 in p62 and three arginines in the Kelch domain of Keap1. Accumulation of endogenous p62 or ectopic expression of p62 sequesters Keap1 into aggregates, resulting in the inhibition of Keap1-mediated Nrf2 ubiquitination and its subsequent degradation by the proteasome. In contrast, overexpression of mutated p62, which loses its ability to interact with Keap1, had no effect on Nrf2 stability, demonstrating that p62-mediated Nrf2 upregulation is Keap1 dependent. These findings demonstrate that autophagy deficiency activates the Nrf2 pathway in a noncanonical cysteine-independent mechanism.

Harbaljit Sohal,  R Weindruch (1996)
Under normal physiological conditions, the use of oxygen by cells of aerobic organisms generates potentially deleterious reactive oxygen metabolites. A chronic state of oxidative stress exists in cells because of an imbalance between prooxidants and antioxidants. The amount of oxidative damage increases as an organism ages and is postulated to be a major causal factor of senescence. Support for this hypothesis includes the following observations: (i) Overexpression of antioxidative enzymes retards the age-related accrual of oxidative damage and extends the maximum life-span of transgenic Drosophila melanogaster. (ii) Variations in longevity among different species inversely correlate with the rates of mitochondrial generation of the superoxide anion radical (O2) and hydrogen peroxide. (iii) Restriction of caloric intake lowers steady-state levels of oxidative stress and damage, retards age-associated changes, and extends the maximum life-span in mammals.

A single p450 allele associated with insecticide resistance in Drosophila.

Phillip J. Daborn,  Adam J. Yen,  S Jeffers … (2002)
Insecticide resistance is one of the most widespread genetic changes caused by human activity, but we still understand little about the origins and spread of resistant alleles in global populations of insects. Here, via microarray analysis of all P450s in Drosophila melanogaster, we show that DDT-R, a gene conferring resistance to DDT, is associated with overtranscription of a single cytochrome P450 gene, Cyp6g1. Transgenic analysis of Cyp6g1 shows that overtranscription of this gene alone is both necessary and sufficient for resistance. Resistance and up-regulation in Drosophila populations are associated with a single Cyp6g1 allele that has spread globally. This allele is characterized by the insertion of an Accord transposable element into the 5' end of the Cyp6g1 gene.