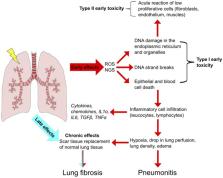 Radiation pneumonitis (RP) and radiation fibrosis (RF) are two dose-limiting toxicities of radiotherapy (RT), especially for lung, and esophageal cancer. It occurs in 5–20% of patients and limits the maximum dose that can be delivered, reducing tumor control probability (TCP) and may lead to dyspnea, lung fibrosis, and impaired quality of life. Both physical and biological factors determine the normal tissue complication probability (NTCP) by Radiotherapy. A better understanding of the pathophysiological sequence of radiation-induced lung injury (RILI) and the intrinsic, environmental and treatment-related factors may aid in the prevention, and better management of radiation-induced lung damage. In this review, we summarize our current understanding of the pathological and molecular consequences of lung exposure to ionizing radiation, and pharmaceutical interventions that may be beneficial in the prevention or curtailment of RILI, and therefore enable a more durable therapeutic tumor response.

PD-L1 is a novel direct target of HIF-1α, and its blockade under hypoxia enhanced MDSC-mediated T cell activation

Quantitative Analyses of Normal Tissue Effects in the Clinic (QUANTEC): an introduction to the scientific issues.

Søren Bentzen, Louis Constine, Joseph O. Deasy … (2010)
Advances in dose-volume/outcome (or normal tissue complication probability, NTCP) modeling since the seminal Emami paper from 1991 are reviewed. There has been some progress with an increasing number of studies on large patient samples with three-dimensional dosimetry. Nevertheless, NTCP models are not ideal. Issues related to the grading of side effects, selection of appropriate statistical methods, testing of internal and external model validity, and quantification of predictive power and statistical uncertainty, all limit the usefulness of much of the published literature. Synthesis (meta-analysis) of data from multiple studies is often impossible because of suboptimal primary analysis, insufficient reporting and variations in the models and predictors analyzed. Clinical limitations to the current knowledge base include the need for more data on the effect of patient-related cofactors, interactions between dose distribution and cytotoxic or molecular targeted agents, and the effect of dose fractions and overall treatment time in relation to nonuniform dose distributions. Research priorities for the next 5-10 years are proposed. Copyright 2010 Elsevier Inc. All rights reserved.

This article was submitted to Radiation Oncology, a section of the journal Frontiers in Oncology