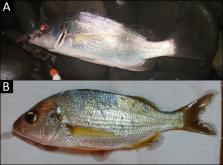 Pomadasys incisus is a thermophilous coastal subtropical fish species belonging to the family Haemulidae . Originally described from Gambia, this species is widely distributed in the Eastern Atlantic from Galicia to South Africa. It has also been recorded in the Mediterranean Sea since 1840, presumably expanding its distribution in the next decades, although the species could have been already present in the basin, but simply overlooked until the mid XIX century. In this study, we first record P. incisus from Cyprus (eastern Mediterranean Sea), based on two opportunistic observations obtained through a citizen-science project and review the distribution of this species in the Mediterranean Sea. The present sighting raises the question on whether this species is a late arrival in the country or its presence has just been neglected until now. Based on present data, the most likely hypothesis is the latter one, with P. incisus occurring in low densities and being overlooked due to the absence of field studies. Whatever is true, some intrinsic or extrinsic factors may have played a role in limiting its spread or wide establishment in the above-mentioned country.

The Biodiversity of the Mediterranean Sea: Estimates, Patterns, and Threats

Marta Coll,  Chiara Piroddi,  Jeroen Steenbeek … (2010)
The Mediterranean Sea is a marine biodiversity hot spot. Here we combined an extensive literature analysis with expert opinions to update publicly available estimates of major taxa in this marine ecosystem and to revise and update several species lists. We also assessed overall spatial and temporal patterns of species diversity and identified major changes and threats. Our results listed approximately 17,000 marine species occurring in the Mediterranean Sea. However, our estimates of marine diversity are still incomplete as yet—undescribed species will be added in the future. Diversity for microbes is substantially underestimated, and the deep-sea areas and portions of the southern and eastern region are still poorly known. In addition, the invasion of alien species is a crucial factor that will continue to change the biodiversity of the Mediterranean, mainly in its eastern basin that can spread rapidly northwards and westwards due to the warming of the Mediterranean Sea. Spatial patterns showed a general decrease in biodiversity from northwestern to southeastern regions following a gradient of production, with some exceptions and caution due to gaps in our knowledge of the biota along the southern and eastern rims. Biodiversity was also generally higher in coastal areas and continental shelves, and decreases with depth. Temporal trends indicated that overexploitation and habitat loss have been the main human drivers of historical changes in biodiversity. At present, habitat loss and degradation, followed by fishing impacts, pollution, climate change, eutrophication, and the establishment of alien species are the most important threats and affect the greatest number of taxonomic groups. All these impacts are expected to grow in importance in the future, especially climate change and habitat degradation. The spatial identification of hot spots highlighted the ecological importance of most of the western Mediterranean shelves (and in particular, the Strait of Gibraltar and the adjacent Alboran Sea), western African coast, the Adriatic, and the Aegean Sea, which show high concentrations of endangered, threatened, or vulnerable species. The Levantine Basin, severely impacted by the invasion of species, is endangered as well. This abstract has been translated to other languages (File S1).