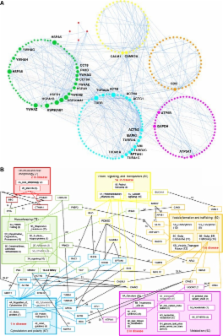 Photoreceptor cells are neurons capable of converting light into electrical signals. The rod outer segment (ROS) region of the photoreceptor cells is a cellular structure made of a stack of around 800 closed membrane disks loaded with rhodopsin ( Liang et al, 2003; Nickell et al, 2007). In disc membranes, rhodopsin arranges itself into paracrystalline dimer arrays, enabling optimal association with the heterotrimeric G protein transducin as well as additional regulatory components ( Ciarkowski et al, 2005). Disruption of these highly regulated structures and processes by germline mutations is the cause of severe blinding diseases such as retinitis pigmentosa, macular degeneration, or congenital stationary night blindness ( Berger et al, 2010).

Traditionally, signal transduction networks have been studied by combining biochemical and genetic experiments addressing the relations among a small number of components. More recently, large throughput experiments using different techniques like two hybrid or co-immunoprecipitation coupled to mass spectrometry have added a new level of complexity ( Ito et al, 2001; Gavin et al, 2002, 2006; Ho et al, 2002; Rual et al, 2005; Stelzl et al, 2005). However, in these studies, space, time, and the fact that many interactions detected for a particular protein are not compatible, are not taken into consideration. Structural information can help discriminate between direct and indirect interactions and more importantly it can determine if two or more predicted partners of any given protein or complex can simultaneously bind a target or rather compete for the same interaction surface ( Kim et al, 2006).

In this work, we build a functional and dynamic interaction network centered on rhodopsin on a systems level, using six steps: In step 1, we experimentally identified the proteomic inventory of the porcine ROS, and we compared our data set with a recent proteomic study from bovine ROS ( Kwok et al, 2008). The union of the two data sets was defined as the ‘ initial experimental ROS proteome'. After removal of contaminants and applying filtering methods, a ‘core ROS proteome', consisting of 355 proteins, was defined.

In step 3, a protein-protein interaction network was constructed based on the literature mining. Since for most of the interactions experimental evidence was co-immunoprecipitation, or pull-down experiments, and in addition many of the edges in the network are supported by single experimental evidence, often derived from high-throughput approaches, we refer to this network, as ‘fuzzy ROS interactome'. Structural information was used to predict binary interactions, based on the finding that similar domain pairs are likely to interact in a similar way (‘nature repeats itself') ( Aloy and Russell, 2002). To increase the confidence in the resulting network, edges supported by a single evidence not coming from yeast two-hybrid experiments were removed, exception being interactions where the evidence was the existence of a three-dimensional structure of the complex itself, or of a highly homologous complex. This curated static network (‘high-confidence ROS interactome') comprises 660 edges linking the majority of the nodes. By considering only edges supported by at least one evidence of direct binary interaction, we end up with a ‘high-confidence binary ROS interactome'. We next extended the published core pathway ( Dell'Orco et al, 2009) using evidence from our high-confidence network. We find several new direct binary links to different cellular functional processes ( Figure 4): the active rhodopsin interacts with Rac1 and the GTP form of Rho. There is also a connection between active rhodopsin and Arf4, as well as PDEδ with Rab13 and the GTP-bound form of Arl3 that links the vision cycle to vesicle trafficking and structure. We see a connection between PDEδ with prenyl-modified proteins, such as several small GTPases, as well as with rhodopsin kinase. Further, our network reveals several direct binary connections between Ca2+-regulated proteins and cytoskeleton proteins; these are CaMK2A with actinin, calmodulin with GAP43 and S1008, and PKC with 14-3-3 family members.

In step 4, part of the network was experimentally validated using three different approaches to identify physical protein associations that would occur under physiological conditions: (i) Co-segregation/co-sedimentation experiments, (ii) immunoprecipitations combined with mass spectrometry and/or subsequent immunoblotting, and (iii) utilizing the glycosylated N-terminus of rhodopsin to isolate its associated protein partners by Concanavalin A affinity purification. In total, 60 co-purification and co-elution experiments supported interactions that were already in our literature network, and new evidence from 175 co-IP experiments in this work was added. Next, we aimed to provide additional independent experimental confirmation for two of the novel networks and functional links proposed based on the network analysis: (i) the proposed complex between Rac1/RhoA/CRMP-2/tubulin/and ROCK II in ROS was investigated by culturing retinal explants in the presence of an ROCK II-specific inhibitor ( Figure 6). While morphology of the retinas treated with ROCK II inhibitor appeared normal, immunohistochemistry analyses revealed several alterations on the protein level. (ii) We supported the hypothesis that PDEδ could function as a GDI for Rac1 in ROS, by demonstrating that PDEδ and Rac1 co localize in ROS and that PDEδ could dissociate Rac1 from ROS membranes in vitro.

In step 5, we use structural information to distinguish between mutually compatible (‘AND') or excluded (‘XOR') interactions. This enables breaking a network of nodes and edges into functional machines or sub-networks/modules. In the vision branch, both ‘AND' and ‘XOR' gates synergize. This may allow dynamic tuning of light and dark states. However, all connections from the vision module to other modules are ‘XOR' connections suggesting that competition, in connection with local protein concentration changes, could be important for transmitting signals from the core vision module.

In the last step, we map and functionally characterize the known mutations that produce blindness.

In summary, this represents the first comprehensive, dynamic, and integrative rhodopsin signaling network, which can be the basis for integrating and mapping newly discovered disease mutants, to guide protein or signaling branch-specific therapies.

Orchestration of signaling, photoreceptor structural integrity, and maintenance needed for mammalian vision remain enigmatic. By integrating three proteomic data sets, literature mining, computational analyses, and structural information, we have generated a multiscale signal transduction network linked to the visual G protein-coupled receptor (GPCR) rhodopsin, the major protein component of rod outer segments. This network was complemented by domain decomposition of protein–protein interactions and then qualified for mutually exclusive or mutually compatible interactions and ternary complex formation using structural data. The resulting information not only offers a comprehensive view of signal transduction induced by this GPCR but also suggests novel signaling routes to cytoskeleton dynamics and vesicular trafficking, predicting an important level of regulation through small GTPases. Further, it demonstrates a specific disease susceptibility of the core visual pathway due to the uniqueness of its components present mainly in the eye. As a comprehensive multiscale network, it can serve as a basis to elucidate the physiological principles of photoreceptor function, identify potential disease-associated genes and proteins, and guide the development of therapies that target specific branches of the signaling pathway.

A comprehensive two-hybrid analysis to explore the yeast protein interactome.

Y Sakaki,  Mitsutoshi Yoshida,  T. Ito … (2001)
Protein-protein interactions play crucial roles in the execution of various biological functions. Accordingly, their comprehensive description would contribute considerably to the functional interpretation of fully sequenced genomes, which are flooded with novel genes of unpredictable functions. We previously developed a system to examine two-hybrid interactions in all possible combinations between the approximately 6,000 proteins of the budding yeast Saccharomyces cerevisiae. Here we have completed the comprehensive analysis using this system to identify 4,549 two-hybrid interactions among 3,278 proteins. Unexpectedly, these data do not largely overlap with those obtained by the other project [Uetz, P., et al. (2000) Nature (London) 403, 623-627] and hence have substantially expanded our knowledge on the protein interaction space or interactome of the yeast. Cumulative connection of these binary interactions generates a single huge network linking the vast majority of the proteins. Bioinformatics-aided selection of biologically relevant interactions highlights various intriguing subnetworks. They include, for instance, the one that had successfully foreseen the involvement of a novel protein in spindle pole body function as well as the one that may uncover a hitherto unidentified multiprotein complex potentially participating in the process of vesicular transport. Our data would thus significantly expand and improve the protein interaction map for the exploration of genome functions that eventually leads to thorough understanding of the cell as a molecular system.

Eva Nielsen,  Gunnlaugur Nielsen,  John Andersen … (2002)
The recent abundance of genome sequence data has brought an urgent need for systematic proteomics to decipher the encoded protein networks that dictate cellular function. To date, generation of large-scale protein-protein interaction maps has relied on the yeast two-hybrid system, which detects binary interactions through activation of reporter gene expression. With the advent of ultrasensitive mass spectrometric protein identification methods, it is feasible to identify directly protein complexes on a proteome-wide scale. Here we report, using the budding yeast Saccharomyces cerevisiae as a test case, an example of this approach, which we term high-throughput mass spectrometric protein complex identification (HMS-PCI). Beginning with 10% of predicted yeast proteins as baits, we detected 3,617 associated proteins covering 25% of the yeast proteome. Numerous protein complexes were identified, including many new interactions in various signalling pathways and in the DNA damage response. Comparison of the HMS-PCI data set with interactions reported in the literature revealed an average threefold higher success rate in detection of known complexes compared with large-scale two-hybrid studies. Given the high degree of connectivity observed in this study, even partial HMS-PCI coverage of complex proteomes, including that of humans, should allow comprehensive identification of cellular networks.

T Kumasaka,  Susanne Behnke,  Krzysztof Palczewski … (2000)
Heterotrimeric guanine nucleotide-binding protein (G protein)-coupled receptors (GPCRs) respond to a variety of different external stimuli and activate G proteins. GPCRs share many structural features, including a bundle of seven transmembrane alpha helices connected by six loops of varying lengths. We determined the structure of rhodopsin from diffraction data extending to 2.8 angstroms resolution. The highly organized structure in the extracellular region, including a conserved disulfide bridge, forms a basis for the arrangement of the seven-helix transmembrane motif. The ground-state chromophore, 11-cis-retinal, holds the transmembrane region of the protein in the inactive conformation. Interactions of the chromophore with a cluster of key residues determine the wavelength of the maximum absorption. Changes in these interactions among rhodopsins facilitate color discrimination. Identification of a set of residues that mediate interactions between the transmembrane helices and the cytoplasmic surface, where G-protein activation occurs, also suggests a possible structural change upon photoactivation.