An Efficient, Lung-Targeted, Drug-Delivery System To Treat Asthma Via Microparticles 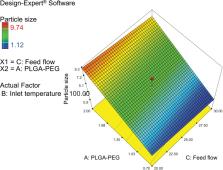 Chronic diseases such as diabetes, asthma, and heart disease are the leading causes of death in developing countries. Public health plays an important role in preventing such diseases to improve individuals’ quality of life. Conventional dosage schemes used in public health to cure various diseases generally lead to undesirable side effects and renders the overall treatment ineffective. For example, a required concentration of drug cannot reach the lungs using conventional methods to cure asthma. Microspheres have emerged as a confirmed drug-delivery system to cure asthma.

The drug content and product yield were found to be 72%±0.8% and 86%±0.4%, respectively; drug release (91.1%) peaked for up to 12 hrs in vitro. Microspheres obtained from the spray dryer were found to be shriveled. The experiments were carried out and verified using various groups of rabbits. In our study, the particle size (8.24 µm) was observed to be an essential parameter for drug delivery. The in vivo results indicated that the targeting efficacy and drug concentration in the lung was higher with the salbutamol-loaded PLGA-PEG SPP formulation (1,410.1±10.11 µg/g, 15 mins), as compared to the conventional formulation (92±0.56 µg/g, 10 min). The final product was stable under 5°C±2°C, 25°C±2°C, and 40°C±2°C/75%±5% relative humidity. In addition, these co-polymers have a good safety profile, as determined by testing on human alveolar basal epithelium A549 cell lines.

Our results prove that microspheres are an alternative drug-delivery system for lung-targeted asthma treatments used in public health.

On the importance and mechanisms of burst release in matrix-controlled drug delivery systems.

Xiao Huang,  Christopher S Brazel (2001)
Although the significance of burst release in controlled delivery systems has not been entirely ignored, no successful theories have been put forth to fully describe the phenomenon. Despite the fact that the fast release of drug in a burst stage is utilized in certain drug administration strategies, the negative effects brought about by burst can be pharmacologically dangerous and economically inefficient. Therefore a thorough understanding of the burst effect in controlled release systems is undoubtedly necessary. In this article, we review experimental observations of burst release in monolithic polymer controlled drug delivery systems, theories of the physical mechanisms causing burst, some of the unique ideas used to prevent burst, and the treatment of burst release in controlled release models.

Yao Fu,  W Linda Kao,  Daniel W K Kao (2010)
The advancement in material design and engineering has led to the rapid development of new materials with increasing complexity and functions. Both non-degradable and degradable polymers have found wide applications in the controlled delivery field. Studies on drug release kinetics provide important information into the function of material systems. To elucidate the detailed transport mechanism and the structure-function relationship of a material system, it is critical to bridge the gap between the macroscopic data and the transport behavior at the molecular level. The structure and function information of selected non-degradable and degradable polymers have been collected and summarized from literature published after the 1990s. The release kinetics of selected drug compounds from various material systems is discussed in case studies. Recent progress in the mathematical models based on different transport mechanisms is highlighted. This article aims to provide an overview of structure-function relationships of selected non-degradable and degradable polymers as drug delivery matrices. Understanding the structure-function relationship of the material system is key to the successful design of a delivery system for a particular application. Moreover, developing complex polymeric matrices requires more robust mathematical models to elucidate the solute transport mechanisms.

N R Labiris,  M Dolovich (2003)
Research in the area of pulmonary drug delivery has gathered momentum in the last several years, with increased interest in using the lung as a means of delivering drugs systemically. Advances in device technology have led to the development of more efficient delivery systems capable of delivering larger doses and finer particles into the lung. As more efficient pulmonary delivery devices and sophisticated formulations become available, physicians and health professionals will have a choice of a wide variety of device and formulation combinations that will target specific cells or regions of the lung, avoid the lung's clearance mechanisms and be retained within the lung for longer periods. It is now recognized that it is not enough just to have inhalation therapy available for prescribing; physicians and other healthcare providers need a basic understanding of aerosol science, inhaled formulations, delivery devices, and bioequivalence of products to prescribe these therapies optimally.