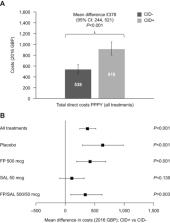 Purpose: Clinically important deterioration (CID) in chronic obstructive pulmonary disease (COPD) is a novel composite endpoint that assesses disease stability. The association between short-term CID and future economic and quality of life (QoL) outcomes has not been previously assessed. This analysis considers 3-year data from the TOwards a Revolution in COPD Health (TORCH) study, to examine this question.

Patients and methods: This post hoc analysis of TORCH (NCT00268216) compared costs and utilities at 3 years among patients without CID (CID-) and with CID (CID+) at 24 weeks. A positive CID status was defined as either: a deterioration in forced expiratory volume in 1 second (FEV 1) of ≥100 mL from baseline; or a ≥4-unit increase from baseline in St George’s Respiratory Questionnaire (SGRQ) total score; or the incidence of a moderate/severe exacerbation. Patients from all treatment arms were included. Utility change was based on the EQ-5D utility index. Costs were based on healthcare resource utilization from 24 weeks to end of follow-up combined with unit costs for the UK (2016 GBP), and reported as per patient per year (PPPY). Adjusted estimates were generated controlling for baseline characteristics, treatment assignment, and number of CID criteria met.

Standards for the diagnosis and treatment of patients with COPD: a summary of the ATS/ERS position paper

The TORCH (towards a revolution in COPD health) survival study protocol.

,  J Vestbo (2004)
Only long-term home oxygen therapy has been shown in randomised controlled trials to increase survival in chronic obstructive pulmonary disease (COPD). There have been no trials assessing the effect of inhaled corticosteroids and long-acting bronchodilators, alone or in combination, on mortality in patients with COPD, despite their known benefit in reducing symptoms and exacerbations. The "TOwards a Revolution in COPD Health" (TORCH) survival study is aiming to determine the impact of salmeterol/fluticasone propionate (SFC) combination and the individual components on the survival of COPD patients. TORCH is a multicentre, randomised, double-blind, parallel-group, placebo-controlled study. Approximately 6,200 patients with moderate-to-severe COPD were randomly assigned to b.i.d. treatment with either SFC (50/500 microg), fluticasone propionate (500 microg), salmeterol (50 microg) or placebo for 3 yrs. The primary end-point is all-cause mortality; secondary end-points are COPD morbidity relating to rate of exacerbations and health status, using the St George's Respiratory Questionnaire. Other end-points include other mortality and exacerbation end-points, requirement for long-term oxygen therapy, and clinic lung function. Safety end-points include adverse events, with additional information on bone fractures. The first patient was recruited in September 2000 and results should be available in 2006. This paper describes the "TOwards a Revolution in COPD Health" study and explains the rationale behind it.