Anticancer and anti-inflammatory activities of girinimbine isolated from Murraya koenigii 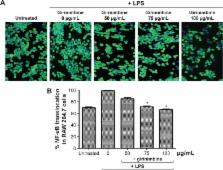 Therapy that directly targets apoptosis and/or inflammation could be highly effective for the treatment of cancer. Murraya koenigii is an edible herb that has been traditionally used for cancer treatment as well as inflammation. Here, we describe that girinimbine, a carbazole alkaloid isolated from M. koenigii, induced apoptosis and inhibited inflammation in vitro as well as in vivo. Induction of apoptosis in human colon cancer cells (HT-29) by girinimbine revealed decreased cell viability in HT-29, whereas there was no cytotoxic effect on normal colon cells. Changes in mitochondrial membrane potential, nuclear condensation, cell permeability, and cytochrome c translocation in girinimbine-treated HT-29 cells demonstrated involvement of mitochondria in apoptosis. Early-phase apoptosis was shown in both acridine orange/propidium iodide and annexin V results. Girinimbine treatment also resulted in an induction of G0/G1 phase arrest which was further corroborated with the upregulation of two cyclin-dependent kinase proteins, p21 and p27. Girinimbine treatment activated apoptosis through the intrinsic pathway by activation of caspases 3 and 9 as well as cleaved caspases 3 and 9 which ended by triggering the execution pathway. Moreover, apoptosis was confirmed by downregulation of Bcl-2 and upregulation of Bax in girinimbine-treated cells. In addition, the key tumor suppressor protein, p53, was seen to be considerably upregulated upon girinimbine treatment. Induction of apoptosis by girinimbine was also evidenced in vivo in zebrafish embryos, with results demonstrating significant distribution of apoptotic cells in embryos after a 24-hour treatment period. Meanwhile, anti-inflammatory action was evidenced by the significant dose-dependent girinimbine inhibition of nitric oxide production in lipopolysaccharide/interferon-gamma-induced cells along with significant inhibition of nuclear factor-kappa B translocation from the cytoplasm to nucleus in stimulated RAW 264.7 cells. Girinimbine was also shown to have considerable antioxidant activity whereby 20 μg/mL of girinimbine was equivalent to 82.17±1.88 μM of Trolox. In mice with carrageenan-induced peritonitis, oral pretreatment with girinimbine helped limit total leukocyte migration (mainly of neutrophils), and reduced pro-inflammatory cytokine levels (interleukin-1beta and tumor necrosis factor-alpha) in the peritoneal fluid. These findings strongly suggest that girinimbine could act as a chemopreventive and/or chemotherapeutic agent by inducing apoptosis while suppressing inflammation. There is a potential for girinimbine to be further investigated for its applicability in treating early stages of cancer.

Tumor suppression in the absence of p53-mediated cell-cycle arrest, apoptosis, and senescence.

Tongyuan Li,  Ning Kon,  Le Jiang … (2012)
Cell-cycle arrest, apoptosis, and senescence are widely accepted as the major mechanisms by which p53 inhibits tumor formation. Nevertheless, it remains unclear whether they are the rate-limiting steps in tumor suppression. Here, we have generated mice bearing lysine to arginine mutations at one (p53(K117R)) or three (p53(3KR); K117R+K161R+K162R) of p53 acetylation sites. Although p53(K117R/K117R) cells are competent for p53-mediated cell-cycle arrest and senescence, but not apoptosis, all three of these processes are ablated in p53(3KR/3KR) cells. Surprisingly, unlike p53 null mice, which rapidly succumb to spontaneous thymic lymphomas, early-onset tumor formation does not occur in either p53(K117R/K117R) or p53(3KR/3KR) animals. Notably, p53(3KR) retains the ability to regulate energy metabolism and reactive oxygen species production. These findings underscore the crucial role of acetylation in differentially modulating p53 responses and suggest that unconventional activities of p53, such as metabolic regulation and antioxidant function, are critical for suppression of early-onset spontaneous tumorigenesis. Copyright © 2012 Elsevier Inc. All rights reserved.

Sean Cutler,  G Cao,  H Alessio (1993)
A relatively simple but sensitive and reliable method of quantitating the oxygen-radical absorbing capacity (ORAC) of antioxidants in serum using a few microliter is described. In this assay system, beta-phycoerythrin (beta-PE) is used as an indicator protein, 2,2'-azobis(2-amidinopropane) dihydrochloride (AAPH) as a peroxyl radical generator, and 6-hydroxy-2,5,7,8-tetramethylchroman-2-carboxylic acid (Trolox, a water-soluble vitamin E analogue) as a control standard. Results are expressed as ORAC units, where 1 ORAC unit equals the net protection produced by 1 microM Trolox. The uniqueness of this assay is that total antioxidant capacity of a sample is estimated by taking the oxidation reaction to completion. At this point all of the nonprotein antioxidants (which include alpha-tocopherol, vitamin C, beta-carotene, uric acid, and bilirubin) and most of the albumin in the sample are oxidized by the peroxyl radical. Results are quantified by measuring the protection produced by antioxidants. This solves many problems associated with kinetics or lag-time measurements. A linear correlation of ORAC value with concentration of serum. Trolox, vitamin C, uric acid, and bovine albumin is demonstrated. The coefficient of variation within a run is found to be about 2% and from run to run about 5%. Trolox, alpha-tocopherol, vitamin C, beta-carotene, uric acid, and bilirubin completely protect beta-PE from oxidation, while bovine albumin protects beta-PE only partially. On a molar basis, the relative peroxyl radical absorbance capacity of Trolox, alpha-tocopherol acid succinate, uric acid, bilirubin, and vitamin C is 1:1:0.92:0.84:0.52. Bovine albumin per unit weight has a lower peroxyl absorbing capacity than these antioxidants.(ABSTRACT TRUNCATED AT 250 WORDS)

M Gordaliza (2007)
Throughout history, natural products have afforded a rich source of compounds that have found many applications in the fields of medicine, pharmacy and biology. Within the sphere of cancer, a number of important new commercialised drugs have been obtained from natural sources, by structural modification of natural compounds, or by the synthesis of new compounds, designed following a natural compound as model. The search for improved cytotoxic agents continues to be an important line in the discovery of modern anticancer drugs. The huge structural diversity of natural compounds and their bioactivity potential have meant that several products isolated from plants, marine flora and microorganisms can serve as "lead" compounds for improvement of their therapeutic potential by molecular modification. Additionally, semisynthesis processes of new compounds, obtained by molecular modification of the functional groups of lead compounds, are able to generate structural analogues with greater pharmacological activity and with fewer side effects. These processes, complemented with high-throughput screening protocols, combinatorial chemistry, computational chemistry and bioinformatics are able to afford compounds that are far more efficient than those currently used in clinical practice. Combinatorial biosynthesis is also applied for the modification of natural microbial products. Likewise, advances in genomics and the advent of biotechnology have improved both the discovery and production of new natural compounds.