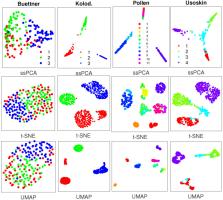 Single-cell RNA-seq (scRNA-seq) is a powerful tool for analyzing heterogeneous and functionally diverse cell population. Visualizing scRNA-seq data can help us effectively extract meaningful biological information and identify novel cell subtypes. Currently, the most popular methods for scRNA-seq visualization are principal component analysis (PCA) and t-distributed stochastic neighbor embedding (t-SNE). While PCA is an unsupervised dimension reduction technique, t-SNE incorporates cluster information into pairwise probability, and then maximizes the Kullback–Leibler divergence. Uniform Manifold Approximation and Projection (UMAP) is another recently developed visualization method similar to t-SNE. However, one limitation with UMAP and t-SNE is that they can only capture the local structure of the data, the global structure of the data is not faithfully preserved. In this manuscript, we propose a semisupervised principal component analysis (ssPCA) approach for scRNA-seq visualization. The proposed approach incorporates cluster-labels into dimension reduction and discovers principal components that maximize both data variance and cluster dependence. ssPCA must have cluster-labels as its input. Therefore, it is most useful for visualizing clusters from a scRNA-seq clustering software. Our experiments with simulation and real scRNA-seq data demonstrate that ssPCA is able to preserve both local and global structures of the data, and uncover the transition and progressions in the data, if they exist. In addition, ssPCA is convex and has a global optimal solution. It is also robust and computationally efficient, making it viable for scRNA-seq cluster visualization.

Aleksandra A. Kolodziejczyk, Jong Kim, Jason C.H. Tsang … (2015)
Summary Embryonic stem cell (ESC) culture conditions are important for maintaining long-term self-renewal, and they influence cellular pluripotency state. Here, we report single cell RNA-sequencing of mESCs cultured in three different conditions: serum, 2i, and the alternative ground state a2i. We find that the cellular transcriptomes of cells grown in these conditions are distinct, with 2i being the most similar to blastocyst cells and including a subpopulation resembling the two-cell embryo state. Overall levels of intercellular gene expression heterogeneity are comparable across the three conditions. However, this masks variable expression of pluripotency genes in serum cells and homogeneous expression in 2i and a2i cells. Additionally, genes related to the cell cycle are more variably expressed in the 2i and a2i conditions. Mining of our dataset for correlations in gene expression allowed us to identify additional components of the pluripotency network, including Ptma and Zfp640, illustrating its value as a resource for future discovery.