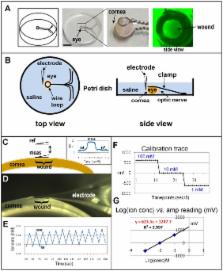 Endogenous electric fields and currents occur naturally at wounds and are a strong signal guiding cell migration into the wound to promote healing. Many cells involved in wound healing respond to small physiological electric fields in vitro. It has long been assumed that wound electric fields are produced by passive ion leakage from damaged tissue. Could these fields be actively maintained and regulated as an active wound response? What are the molecular, ionic and cellular mechanisms underlying the wound electric currents?

Using rat cornea wounds as a model, we measured the dynamic timecourses of individual ion fluxes with ion-selective probes. We also examined chloride channel expression before and after wounding. After wounding, Ca 2+ efflux increased steadily whereas K + showed an initial large efflux which rapidly decreased. Surprisingly, Na + flux at wounds was inward. A most significant observation was a persistent large influx of Cl −, which had a time course similar to the net wound electric currents we have measured previously. Fixation of the tissues abolished ion fluxes. Pharmacological agents which stimulate ion transport significantly increased flux of Cl −, Na + and K +. Injury to the cornea caused significant changes in distribution and expression of Cl − channel CLC2.

These data suggest that the outward electric currents occurring naturally at corneal wounds are carried mainly by a large influx of chloride ions, and in part by effluxes of calcium and potassium ions. Ca 2+ and Cl − fluxes appear to be mainly actively regulated, while K + flux appears to be largely due to leakage. The dynamic changes of electric currents and specific ion fluxes after wounding suggest that electrical signaling is an active response to injury and offers potential novel approaches to modulate wound healing, for example eye-drops targeting ion transport to aid in the challenging management of non-healing corneal ulcers.

Li Pu,  Bing Song,  Teiji Wada … (2006)
Wound healing is essential for maintaining the integrity of multicellular organisms. In every species studied, disruption of an epithelial layer instantaneously generates endogenous electric fields, which have been proposed to be important in wound healing. The identity of signalling pathways that guide both cell migration to electric cues and electric-field-induced wound healing have not been elucidated at a genetic level. Here we show that electric fields, of a strength equal to those detected endogenously, direct cell migration during wound healing as a prime directional cue. Manipulation of endogenous wound electric fields affects wound healing in vivo. Electric stimulation triggers activation of Src and inositol-phospholipid signalling, which polarizes in the direction of cell migration. Notably, genetic disruption of phosphatidylinositol-3-OH kinase-gamma (PI(3)Kgamma) decreases electric-field-induced signalling and abolishes directed movements of healing epithelium in response to electric signals. Deletion of the tumour suppressor phosphatase and tensin homolog (PTEN) enhances signalling and electrotactic responses. These data identify genes essential for electrical-signal-induced wound healing and show that PI(3)Kgamma and PTEN control electrotaxis.

Amiloride and its analogs as tools in the study of ion transport.

Thomas Kleyman,  E J Cragoe (1988)
Amiloride inhibits most plasma membrane Na+ transport systems. We have reviewed the pharmacology of inhibition of these transporters by amiloride and its analogs. Thorough studies of the Na+ channel, the Na+/H+ exchanger, and the Na+/Ca2+ exchanger, clearly show that appropriate modification of the structure of amiloride will generate analogs with increased affinity and specificity for a particular transport system. Introduction of hydrophobic substituents on the terminal nitrogen of the guanidino moiety enhances activity against the Na+ channel; whereas addition of hydrophobic (or hydrophilic) groups on the 5-amino moiety enhances activity against the Na+/H+ exchanger. Activity against the Na+/Ca2+ exchanger and Ca2+ channel is increased with hydrophobic substituents at either of these sites. Appropriate modification of amiloride has produced analogs that are several hundred-fold more active than amiloride against specific transporters. The availability of radioactive and photoactive amiloride analogs, anti-amiloride antibodies, and analogs coupled to support matrices should prove useful in future studies of amiloride-sensitive transport systems. The use of amiloride and its analogs in the study of ion transport requires a knowledge of the pharmacology of inhibition of transport proteins, as well as effects on enzymes, receptors, and other cellular processes, such as DNA, RNA, and protein synthesis, and cellular metabolism. One must consider whether the effects seen on various cellular processes are direct or due to a cascade of events triggered by an effect on an ion transport system.

Publisher ID: PONE-D-10-04879
DOI: 10.1371/journal.pone.0017411
PMC ID: 3045448
PubMed ID: 21364900
Copyright statement: Vieira et al. This is an open-access article distributed under the terms of the Creative Commons Attribution License, which permits unrestricted use, distribution, and reproduction in any medium, provided the original author and source are credited.