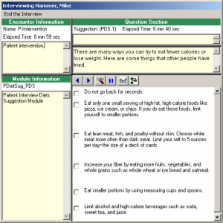 Almost 50% of Americans have elevated low-density lipoprotein cholesterol (LDL-C). The behaviors required to lower LDL-C levels may be difficult to adhere to if they are inconsistent with spouses' health practices, and, alternatively, may be enhanced by enlisting support from the spouse. This trial extends previous trials by requiring spouse enrollment, teaching spouses how to provide emotional and instrumental support, allowing patients to decide which component of the intervention they would like to receive, and having patients determine their own goals and action plans.

Veteran outpatients with above-goal LDL-C (N = 250) and their spouses are randomized, as a couple, to receive printed education materials only or the materials plus an 11-month, nurse-delivered, telephone-based intervention. The intervention contains four modules: medication adherence, diet, exercise, and patient-physician communication. Patients decide which modules they complete and in which order; modules may be repeated or omitted. Telephone calls are to patients and spouses separately and occur monthly. During each patient telephone call, patients' progress is reviewed, and patients create goals and action plans for the upcoming month. During spouse telephone calls, which occur within one week of patient calls, spouses are informed of patients' goals and action plans and devise strategies to increase emotional and instrumental support.

The primary outcome is patients' LDL-C, measured at baseline, 6 months, and 11 months. Linear mixed models will be used to test the primary hypothesis that an 11-month, telephone-based patient-spouse intervention will result in a greater reduction in LDL-C as compared to printed education materials. Various process measures, including social support, self-efficacy, medication adherence, dietary behavior, and exercise, are also assessed to explain any change, or lack thereof, in LDL-C.

Given the social context in which self-management occurs, interventions that teach spouses to provide instrumental and emotional support may help patients initiate and adhere to behaviors that lower their LDL-C levels. Moreover, allowing patients to retain autonomy by deciding which behaviors they would like to change and how may improve adherence and clinical outcomes.

The ClinicalTrials.gov registration number is NCT00321789.

The Self-Administered Comorbidity Questionnaire: a new method to assess comorbidity for clinical and health services research.

Anne Fossel,  Gerold Stucki,  Jeffrey Katz … (2003)
To develop the Self-Administered Comorbidity Questionnaire (SCQ) and assess its psychometric properties, including the predictive validity of the instrument, as reflected by its association with health status and health care utilization after 1 year. A cross-sectional comparison of the SCQ with a standard, chart abstraction-based measure (Charlson Index) was conducted on 170 inpatients from medical and surgical care units. The association of the SCQ with the chart-based comorbidity instrument and health status (short form 36) was evaluated cross sectionally. The association between these measures and health status and resource utilization was assessed after 1 year. The Spearman correlation coefficient for the association between the SCQ and the Charlson Index was 0.32. After restricting each measure to include only comparable items, the correlation between measures was stronger (Spearman r = 0.55). The SCQ had modest associations with measures of resource utilization during the index admission, and with health status and resource utilization after 1 year. The SCQ has modest correlations with a widely used medical record-based comorbidity instrument, and with subsequent health status and utilization. This new measure represents an efficient method to assess comorbid conditions in clinical and health services research. It will be particularly useful in settings where medical records are unavailable.

Lesley Stewart,  P Ritter,  Jack D. Sobel … (2001)
To assess the 1- and 2-year health status, health care utilization and self-efficacy outcomes for the Chronic Disease Self-Management Program (CDSMP). The major hypothesis is that during the 2-year period CDSMP participants will experience improvements or less deterioration than expected in health status and reductions in health care utilization. Longitudinal design as follow-up to a randomized trial. Community. Eight hundred thirty-one participants 40 years and older with heart disease, lung disease, stroke, or arthritis participated in the CDSMP. At 1- and 2-year intervals respectively 82% and 76% of eligible participants completed data. Health status (self-rated health, disability, social/role activities limitations, energy/fatigue, and health distress), health care utilization (ER/outpatient visits, times hospitalized, and days in hospital), and perceived self-efficacy were measured. Compared with baseline for each of the 2 years, ER/outpatient visits and health distress were reduced (P <0.05). Self-efficacy improved (P <0.05). The rate of increase is that which is expected in 1 year. There were no other significant changes. A low-cost program for promoting health self-management can improve elements of health status while reducing health care costs in populations with diverse chronic diseases.