A Case Report of Familial Benign Hypocalciuric Hypercalcemia: A Mutation in the Calcium-Sensing Receptor Gene 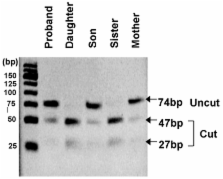 Familial benign hypocalciuric hypercalcemia (FBHH) is an autosomal dominant trait with high penetrance, clinically manifestating a relatively benign, lifelong, persistent hypercalcemia and hypocalciuria without hypercalcemic related complications. The calcium-sensing receptor (CaSR) plays an important role in the regulation of PTH secretion and calcium metabolism. Here we present a family with FBHH of an autosomal dominant inheritance. A heterozygous mutation of E297K (GAG→AAG, exon 4) of CaSR gene was found in 3 family members. To our knowledge, it is the first confirmed case of FBHH with CaSR gene mutation in Korea.

Geoffrey N. Hendy,  David E C Cole,  Lília D’Souza-Li … (2004)
Familial hypocalciuric hypercalcemia (FHH) is caused by heterozygous loss-of-function mutations in the calcium-sensing receptor (CASR), in which the lifelong hypercalcemia is generally asymptomatic. Homozygous loss-of-function CASR mutations manifest as neonatal severe hyperparathyroidism (NSHPT), a rare disorder characterized by extreme hypercalcemia and the bony changes of hyperparathyroidism, which occur in infancy. Activating mutations in the CASR gene have been identified in several families with autosomal dominant hypocalcemia (ADH), autosomal dominant hypoparathyroidism, or hypocalcemic hypercalciuria. Individuals with ADH may have mild hypocalcemia and relatively few symptoms. However, in some cases seizures can occur, especially in younger patients, and these often happen during febrile episodes due to intercurrent infection. Thus far, 112 naturally-occurring mutations in the human CASR gene have been reported, of which 80 are unique and 32 are recurrent. To better understand the mutations causing defects in the CASR gene and to define specific regions relevant for ligand-receptor interaction and other receptor functions, the data on mutations were collected and the information was centralized in the CASRdb (www.casrdb.mcgill.ca), which is easily and quickly accessible by search engines for retrieval of specific information. The information can be searched by mutation, genotype-phenotype, clinical data, in vitro analyses, and authors of publications describing the mutations. CASRdb is regularly updated for new mutations and it also provides a mutation submission form to ensure up-to-date information. The home page of this database provides links to different web pages that are relevant to the CASR, as well as disease clinical pages, sequence of the CASR gene exons, and position of mutations in the CASR. The CASRdb will help researchers to better understand and analyze the mutations, and aid in structure-function analyses. Copyright 2004 Wiley-Liss, Inc.

Deepak R. Thakker (2004)
The human calcium-sensing receptor (CaSR) is a 1078 amino acid cell surface protein, which is predominantly expressed in the parathyroids and kidney, and is a member of the family of G protein-coupled receptors. The CaSR allows regulation of parathyroid hormone (PTH) secretion and renal tubular calcium reabsorption in response to alterations in extracellular calcium concentrations. The human CaSR gene is located on chromosome 3q21.1 and loss-of-function CaSR mutations have been reported in the hypercalcaemic disorders of familial benign (hypocalciuric) hypercalcaemia (FHH, FBH or FBHH) and neonatal severe primary hyperparathyroidism (NSHPT). However, some individuals with loss-of-function CaSR mutations remain normocalcaemic. In addition, there is genetic heterogeneity amongst the forms of FHH. Thus, the majority of FHH patients have loss-of-function CaSR mutations, and this is referred to as FHH type 1. However, in one family, the causative gene for FHH is located on 19p13, referred to as FHH type 2, and in another family it is located on 19q13, referred to as FHH type 3. Gain-of-function CaSR mutations have been shown to result in autosomal dominant hypocalcaemia with hypercalciuria (ADHH) and Bartter's syndrome type V. CaSR auto-antibodies have been found in FHH patients who did not have loss-of-function CaSR mutations, and in patients with an acquired form (i.e. autoimmune) of hypoparathyroidism. Thus, abnormalities of the CaSR are associated with three hypercalcaemic and three hypocalcaemic disorders.

This is an Open Access article distributed under the terms of the Creative Commons Attribution Non-Commercial License ( http://creativecommons.org/licenses/by-nc/3.0) which permits unrestricted noncommercial use, distribution, and reproduction in any medium, provided the original work is properly cited.