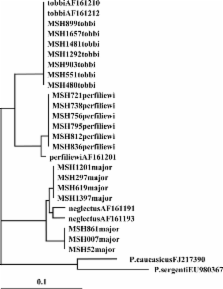 The adult female sand flies (Diptera: Psychodidae) of the subgenus Larroussius are important vectors of Leishmania infantum (Kinetoplastida: Tripanosomatidae) in Meshkinshahr district, Northwest of Iran. Four Phlebotomus ( Larroussius) species are present in this area, i.e. Phlebotomus ( Larroussius) kandelakii, P. ( La.) major, P. ( La.) perfiliewi and P. ( La.) tobbi. The objective of the present study was to identify and distinguish the females of P. perfiliewi, P. major and P. tobbi, in this district.

Adult sand flies were collected with sticky papers, CDC light traps, and aspirator in 2006. Individual sand flies of this four species from thirty different locations were characterized morphologically and by comparative DNA sequences analyses of a fragment of mitochondrial gene Cytochrome b (Cyt b) and nuclear gene Elongation Factor 1-alpha (EF-1α). PCR amplification was carried out for all three species P. major, P. perfiliewi and P. tobbi in the subgenus Larroussius.

According to our findings, the phylogeny of Cyt b and EF-1α haplotypes confirms the relationships between P. major, P. tobbi and P. perfiliewi as already defined by their morphological similarities.

Phlebotomine vectors of the leishmaniases: a review.

R Killick (1989)
An account is given of work published during the past 10 years incriminating species of phlebotomine sandflies as vectors of Leishmania species which infect man. An assessment is made of the degrees of certainty of the vectorial roles of eighty-one species and subspecies of sandflies (thirty-seven Old World and forty-four New World) in the transmission of twenty-nine leishmanial parasites of mammals. At least one species of sandfly is considered to be a proven vector of each of ten parasites. Of the eighty-one sandfly taxa, evidence is judged to be sufficient to incriminate nineteen as proven vectors (eleven Phlebotomus species and eight Lutzomyia species or subspecies) and evidence for a further fourteen (nine Phlebotomus species and five Lutzomyia species or subspecies) is considered to be strong. The suggested criteria for incrimination of a vector are anthropophily and common infection with the same leishmanial parasite as that found in man in the same place. More weight should be given to natural infections persisting after the digestion of a bloodmeal than those in the presence of blood. Supporting evidence is a concordance in the distribution of the fly and the disease in man, proof that the fly feeds regularly on the reservoir host, a flourishing development of the parasite in infected flies and the experimental transmission of the parasite by the bite of the fly.

Insect vectors of Leishmania: distribution, physiology and their control.

Umakant Sharma,  Sarman Singh (2008)
Leishmaniasis is a deadly vector-borne disease that causes significant morbidity and mortality in Africa, Asia, Latin America and Mediterranean regions. The causative agent of leishmaniasis is transmitted from man to man by a tiny insect called sandfly. Approximately, 600 species of sandflies are known but only 10% of these act as disease vectors. Further, only 30 species of these are important from public health point. Fauna of Indian sub-zone is represented by 46 species, of these, 11 belong to Phlebotomine species and 35 to Sergentomyia species. Phlebotomus argentipes is the proven vector of kala-azar or visceral leishmaniasis in India. This review gives an insight into the insect vectors of human leishmaniasis, their geographical distribution, recent taxonomic classification, habitat, and different control measures including indoor residual spraying (IRS), insecticide-treated bednets (ITNs), environmental management, biological control, and emerging resistance to DDT. Role of satellite remote sensing for early prediction of the disease by identifying the sandflygenic conditions cannot be undermined. The article also underlines the importance of synthetic pheromones which can be used in near future for the control of these vectors.

The biology and control of Phlebotomine sand flies

This is an open-access article distributed under the terms of the Creative Commons Attribution NonCommercial 3.0 License (CC BY-NC 3.0), which allows users to read, copy, distribute and make derivative works for non-commercial purposes from the material, as long as the author of the original work is cited properly.