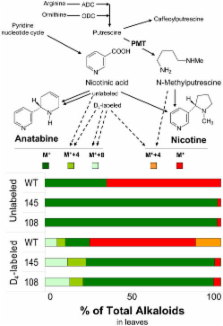 Plants produce metabolites that directly decrease herbivore performance, and as a consequence, herbivores are selected for resistance to these metabolites. To determine whether these metabolites actually function as defenses requires measuring the performance of plants that are altered only in the production of a certain metabolite. To date, the defensive value of most plant resistance traits has not been demonstrated in nature. We transformed native tobacco (Nicotiana attenuata) with a consensus fragment of its two putrescine N-methyl transferase (pmt) genes in either antisense or inverted-repeat (IR pmt) orientations. Only the latter reduced (by greater than 95%) constitutive and inducible nicotine. With D 4-nicotinic acid (NA), we demonstrate that silencing pmt inhibits nicotine production, while the excess NA dimerizes to form anatabine. Larvae of the nicotine-adapted herbivore Manduca sexta (tobacco hornworm) grew faster and, like the beetle Diabrotica undecimpunctata, preferred IR pmt plants in choice tests. When planted in their native habitat, IR pmt plants were attacked more frequently and, compared to wild-type plants, lost 3-fold more leaf area from a variety of native herbivores, of which the beet armyworm, Spodoptera exigua, and Trimerotropis spp. grasshoppers caused the most damage. These results provide strong evidence that nicotine functions as an efficient defense in nature and highlights the value of transgenic techniques for ecological research.

S. Varsha Wesley,  Christopher A. Helliwell,  Neil A Smith … (2001)
Post-transcriptional silencing of plant genes using anti-sense or co-suppression constructs usually results in only a modest proportion of silenced individuals. Recent work has demonstrated the potential for constructs encoding self-complementary 'hairpin' RNA (hpRNA) to efficiently silence genes. In this study we examine design rules for efficient gene silencing, in terms of both the proportion of independent transgenic plants showing silencing, and the degree of silencing. Using hpRNA constructs containing sense/anti-sense arms ranging from 98 to 853 nt gave efficient silencing in a wide range of plant species, and inclusion of an intron in these constructs had a consistently enhancing effect. Intron-containing constructs (ihpRNA) generally gave 90-100% of independent transgenic plants showing silencing. The degree of silencing with these constructs was much greater than that obtained using either co-suppression or anti-sense constructs. We have made a generic vector, pHANNIBAL, that allows a simple, single PCR product from a gene of interest to be easily converted into a highly effective ihpRNA silencing construct. We have also created a high-throughput vector, pHELLSGATE, that should facilitate the cloning of gene libraries or large numbers of defined genes, such as those in EST collections, using an in vitro recombinase system. This system may facilitate the large-scale determination and discovery of plant gene functions in the same way as RNAi is being used to examine gene function in Caenorhabditis elegans.

Jasmonate-induced responses are costly but benefit plants under attack in native populations.

I Baldwin (1998)
Herbivore attack is widely known to reduce food quality and to increase chemical defenses and other traits responsible for herbivore resistance. Inducible defenses are commonly thought to allow plants to forgo the costs of defense when not needed; however, neither their defensive function (increasing a plant's fitness) nor their cost-savings function have been demonstrated in nature. The root-produced toxin nicotine increases after herbivore attack in the native, postfire annual Nicotiana attenuata and is internally activated by the wound hormone, jasmonic acid. I treated the roots of plants with the methyl ester of this hormone (MeJA) to elicit a response in one member of each of 745 matched pairs of plants growing in native populations with different probabilities of attack from herbivores, and measured the lifetime production of viable seed. In populations with intermediate rates of attack, induced plants were attacked less often by herbivores and survived to produce more seed than did their uninduced counterparts. Previous induction did not significantly increase the fitness of plants suffering high rates of attack. However, if plants had not been attacked, induced plants produced less seed than did their uninduced counterparts. Jasmonate-induced responses function as defenses but are costly, and inducibility allows this species to forgo these costs when the defenses are unnecessary.

Ian T. Baldwin,  Rayko Halitschke (2003)
Inhibition of jasmonic acid (JA) signaling has been shown to decrease herbivore resistance, but the responsible mechanisms are largely unknown because insect resistance is poorly understood in most model plant systems. We characterize three members of the lipoxygenase (LOX) gene family in the native tobacco plant Nicotiana attenuata and manipulate, by antisense expression, a specific, wound- and herbivory-induced isoform (LOX3) involved in JA biosynthesis. In three independent lines, antisense expression reduced wound-induced JA accumulation but not the release of green leaf volatiles (GLVs). The impaired JA signaling reduced two herbivore-induced direct defenses, nicotine and trypsin protease inhibitors (TPI), as well as the potent indirect defense, the release of volatile terpenes that attract generalist predators to feeding herbivores. All these defenses could be fully restored by methyl-JA (MeJA) treatment, with the exception of the increase in TPI activity, which was partially restored, suggesting the involvement of additional signals. The impaired ability to produce chemical defenses resulted in lower resistance to Manduca sexta attack, which could also be restored by MeJA treatment. Expression analysis using a cDNA microarray, specifically designed to analyze M. sexta-induced gene expression in N. attenuata, revealed a pivotal role for LOX3-produced oxylipins in upregulating defense genes (protease inhibitor, PI; xyloglucan endotransglucosylase/hydrolase, XTH; threonine deaminase, TD; hydroperoxide lyase, HPL), suppressing both downregulated growth genes (RUBISCO and photosystem II, PSII) and upregulated oxylipin genes (alpha-dioxygenase, alpha-DOX). By genetically manipulating signaling in a plant with a well-characterized ecology, we demonstrate that the complex phenotypic changes that mediate herbivore resistance are controlled by a specific part of the oxylipin cascade.

DOI: 10.1371/journal.pbio.0020217
PMC ID: 509292
PubMed ID: 15314646
Copyright statement: Copyright: © 2004 Steppuhn et al. This is an open-access article distributed under the terms of the Creative Commons Attribution License, which permits unrestricted use, distribution, and reproduction in any medium, provided the original work is properly cited