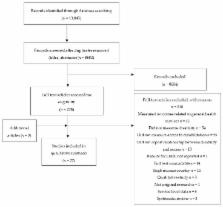 Rehabilitation seeks to optimize functioning of people with impairments and includes a range of specific health services—diagnosis, treatment, surgery, assistive devices, and therapy. Evidence on access to rehabilitation services for people with disabilities in low- and middle-income countries (LMICs) is limited. A systematic review was conducted to examine this in depth. In February 2017, six databases were searched for studies measuring access to rehabilitation among people with disabilities in LMICs. Eligible measures of access to rehabilitation included: use of assistive devices, use of specialist health services, and adherence to treatment. Two reviewers independently screened titles, abstracts, and full texts. Data was extracted by one reviewer and checked by a second. Of 13,048 screened studies, 77 were eligible for inclusion. These covered a broad geographic area. 17% of studies measured access to hearing-specific services; 22% vision-specific; 31% physical impairment-specific; and 44% measured access to mental impairment-specific services. A further 35% measured access to services for any disability. A diverse range of measures of disability and access were used across studies making comparability difficult. However, there was some evidence that access to rehabilitation is low among people with disabilities. No clear patterns were seen in access by equity measures such as age, locality, socioeconomic status, or country income group due to the limited number of studies measuring these indicators, and the range of measures used. Access to rehabilitation services was highly variable and poorly measured within the studies in the review, but generally shown to be low. Far better metrics are needed, including through clinical assessment, before we have a true appreciation of the population level need for and coverage of these services.

Poverty and disability in low- and middle-income countries: A systematic review

Lena Morgon Banks, Hannah Kuper, Sarah Polack (2017)
Introduction Disability and poverty are believed to operate in a cycle, with each reinforcing the other. While agreement on the existence of a link is strong, robust empirical evidence substantiating and describing this potential association is lacking. Consequently, a systematic review was undertaken to explore the relationship between disability and economic poverty, with a focus on the situation in low and middle income countries (LMICs). Methods Ten electronic databases were searched to retrieve studies of any epidemiological design, published between 1990-March 2016 with data comparing the level of poverty between people with and without disabilities in LMICs (World Bank classifications). Poverty was defined using economic measures (e.g. assets, income), while disability included both broad assessments (e.g. self-reported functional or activity limitations) and specific impairments/disorders. Data extracted included: measures of association between disability and poverty, population characteristics and study characteristics. Proportions of studies finding positive, negative, null or mixed associations between poverty and disability were then disaggregated by population and study characteristics. Results From the 15,500 records retrieved and screened, 150 studies were included in the final sample. Almost half of included studies were conducted in China, India or Brazil (n = 70, 47%). Most studies were cross-sectional in design (n = 124, 83%), focussed on specific impairment types (n = 115, 77%) and used income as the measure for economic poverty (n = 82, 55%). 122 studies (81%) found evidence of a positive association between disability and a poverty marker. This relationship persisted when results were disaggregated by gender, measure of poverty used and impairment types. By country income group at the time of data collection, the proportion of country-level analyses with a positive association increased with the rising income level, with 59% of low-income, 67% of lower-middle and 72% of upper-middle income countries finding a positive relationship. By age group, the proportion of studies reporting a positive association between disability and poverty was lowest for older adults and highest for working-age adults (69% vs. 86%). Conclusions There is strong evidence for a link between disability and poverty in LMICs and an urgent need for further research and programmatic/policy action to break the cycle.

Global Prevalence of Presbyopia and Vision Impairment from Uncorrected Presbyopia

Disability and treatment of specific mental and physical disorders across the world.