Public Data Archiving in Ecology and Evolution: How Well Are We Doing? 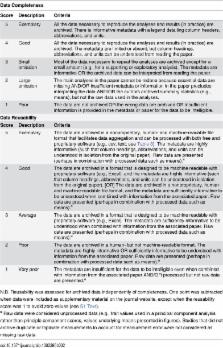 Policies that mandate public data archiving (PDA) successfully increase accessibility to data underlying scientific publications. However, is the data quality sufficient to allow reuse and reanalysis? We surveyed 100 datasets associated with nonmolecular studies in journals that commonly publish ecological and evolutionary research and have a strong PDA policy. Out of these datasets, 56% were incomplete, and 64% were archived in a way that partially or entirely prevented reuse. We suggest that cultural shifts facilitating clearer benefits to authors are necessary to achieve high-quality PDA and highlight key guidelines to help authors increase their data’s reuse potential and compliance with journal data policies.

Careful scrutiny of one hundred studies in journals that mandate data archival reveals that over half do not comply with their journal’s data policy.

Carol Tenopir,  Suzie Allard,  Kimberly Douglass … (2011)
Background Scientific research in the 21st century is more data intensive and collaborative than in the past. It is important to study the data practices of researchers – data accessibility, discovery, re-use, preservation and, particularly, data sharing. Data sharing is a valuable part of the scientific method allowing for verification of results and extending research from prior results. Methodology/Principal Findings A total of 1329 scientists participated in this survey exploring current data sharing practices and perceptions of the barriers and enablers of data sharing. Scientists do not make their data electronically available to others for various reasons, including insufficient time and lack of funding. Most respondents are satisfied with their current processes for the initial and short-term parts of the data or research lifecycle (collecting their research data; searching for, describing or cataloging, analyzing, and short-term storage of their data) but are not satisfied with long-term data preservation. Many organizations do not provide support to their researchers for data management both in the short- and long-term. If certain conditions are met (such as formal citation and sharing reprints) respondents agree they are willing to share their data. There are also significant differences and approaches in data management practices based on primary funding agency, subject discipline, age, work focus, and world region. Conclusions/Significance Barriers to effective data sharing and preservation are deeply rooted in the practices and culture of the research process as well as the researchers themselves. New mandates for data management plans from NSF and other federal agencies and world-wide attention to the need to share and preserve data could lead to changes. Large scale programs, such as the NSF-sponsored DataNET (including projects like DataONE) will both bring attention and resources to the issue and make it easier for scientists to apply sound data management principles.

Cesare Furlanello,  Aedín C Culhane,  Xiangqin Cui … (2009)
Given the complexity of microarray-based gene expression studies, guidelines encourage transparent design and public data availability. Several journals require public data deposition and several public databases exist. However, not all data are publicly available, and even when available, it is unknown whether the published results are reproducible by independent scientists. Here we evaluated the replication of data analyses in 18 articles on microarray-based gene expression profiling published in Nature Genetics in 2005-2006. One table or figure from each article was independently evaluated by two teams of analysts. We reproduced two analyses in principle and six partially or with some discrepancies; ten could not be reproduced. The main reason for failure to reproduce was data unavailability, and discrepancies were mostly due to incomplete data annotation or specification of data processing and analysis. Repeatability of published microarray studies is apparently limited. More strict publication rules enforcing public data availability and explicit description of data processing and analysis should be considered.

DGR and SAB were supported by grants from the Australian National University ( http://biology.anu.edu.au), the Natural Science and Engineering Research Council of Canada ( http://www.nserc-crsng.gc.ca/index_eng.asp) and the Fonds de Recherche du Québec Nature et Technologies ( http://www.frqnt.gouv.qc.ca/accueil). LEBK and RL were supported by Australian Research Council Future Fellowships ( http://www.arc.gov.au/ncgp/futurefel/future_default.htm). The funders had no role in study design, data collection and analysis, decision to publish, or preparation of the manuscript.