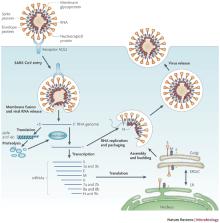 The outbreaks of severe acute respiratory syndrome (SARS) between 2002 and 2004 killed hundreds of people. Vaccines against the SARS coronavirus (SARS-CoV) could protect the population during future outbreaks. In this Review, Shibo Jiang and colleagues describe such vaccines, as well as other therapeutics, based on the SARS-CoV spike protein.

Severe acute respiratory syndrome (SARS) is a newly emerging infectious disease caused by a novel coronavirus, SARS-coronavirus (SARS-CoV). The SARS-CoV spike (S) protein is composed of two subunits; the S1 subunit contains a receptor-binding domain that engages with the host cell receptor angiotensin-converting enzyme 2 and the S2 subunit mediates fusion between the viral and host cell membranes. The S protein plays key parts in the induction of neutralizing-antibody and T-cell responses, as well as protective immunity, during infection with SARS-CoV. In this Review, we highlight recent advances in the development of vaccines and therapeutics based on the S protein.

HIV entry and its inhibition.

U. Buchholz,  Kathleen L. Collins,  Kanta Subbarao … (2004)
We investigated the contributions of the structural proteins of severe acute respiratory syndrome (SARS) coronavirus (CoV) to protective immunity by expressing them individually and in combinations from a recombinant parainfluenza virus (PIV) type 3 vector called BHPIV3. This vector provided direct immunization of the respiratory tract, the major site of SARS transmission, replication, and disease. The BHPIV3/SARS recombinants were evaluated for immunogenicity and protective efficacy in hamsters, which support a high level of pulmonary SARS-CoV replication. A single intranasal administration of BHPIV3 expressing the SARS-CoV spike protein (S) induced a high titer of SARS-CoV-neutralizing serum antibodies, only 2-fold less than that induced by SARS-CoV infection. The expression of S with the two other putative virion envelope proteins, the matrix M and small envelope E proteins, did not augment the neutralizing antibody response. In absence of S, expression of M and E or the nucleocapsid protein N did not induce a detectable serum SARS-CoV-neutralizing antibody response. Immunization with BHPIV3 expressing S provided complete protection against SARS-CoV challenge in the lower respiratory tract and partial protection in the upper respiratory tract. This was augmented slightly by coexpression with M and E. Expression of M, E, or N in the absence of S did not confer detectable protection. These results identify S among the structural proteins as the only significant SARS-CoV neutralization antigen and protective antigen and show that a single mucosal immunization is highly protective in an experimental animal that supports efficient replication of SARS-CoV.

Lanying Du received her PhD from the University of Hong Kong and is now a research fellow at the Viral Immunology Laboratory, the Lindsley F. Kimball Research Institute of New York Blood Center, USA. Her research interests focus on studies of the structure and function of the severe acute respiratory syndrome-coronavirus (SARS-CoV) spike protein and the development of spike protein-based SARS vaccines.

Yuxian He is an assistant member at the Viral Immunology Laboratory, the Lindsley F. Kimball Research Institute of New York Blood Center, USA, where he has made dedicated efforts to develop vaccines and therapeutics against emerging infectious viruses, including HIV, severe acute respiratory syndrome-coronavirus (SARS-CoV) and highly pathogenic influenza virus H5N1.

Yusen Zhou is Professor and Director of the Department of Pathogen Molecular Biology at the Beijing Institute of Microbiology and Epidemiology, China, where he has focused on studies of viral immunology and pathogenesis of hepatitis and emerging infectious diseases, including severe acute respiratory syndrome (SARS), H5N1 avian influenza and haemorrhagic fever with renal syndrome.

Shuwen Liu is Professor and Executive Director of the Antiviral Research Center, School of Pharmaceutical Sciences of the Southern Medical University, Guangzhou, China, where he has worked on the development of antiviral therapeutics against HIV, severe acute respiratory syndrome-coronavirus (SARS-CoV), influenza virus, hepatitis B virus and hepatitis C virus.

Bo-Jian Zheng is Professor and Director of the Vaccine Laboratory, Department of Microbiology, the University of Hong Kong, where he has worked on the epidemiology, immunology and anti-viral therapy of viral emerging infectious diseases, with a focus on severe acute respiratory syndrome (SARS) and H5N1 avian influenza.

Shibo Jiang is Head of the Viral Immunology Laboratory at the Lindsley F. Kimball Research Institute of the New York Blood Center, USA, where he has focused on the development of envelope glycoprotein-based therapeutics and vaccines against HIV and severe acute respiratory syndrome-coronavirus (SARS-CoV). He was the first to discover the highly potent anti-HIV peptide derived from the HIV-1 glycoprotein 41 HR2 region, and later licensed the patent to Trimeris Pharmaceuticals, who then developed the peptidic anti-HIV drug enfuvirtide, the first HIV fusion inhibitor approved by the US Food and Drug Administration. This discovery opened a new avenue to the development of viral fusion inhibitors against viruses with class I fusion proteins.