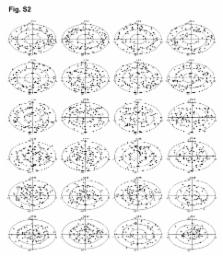 Studies of higher-order chromatin arrangements are an essential part of ongoing attempts to explore changes in epigenome structure and their functional implications during development and cell differentiation. However, the extent and cell-type-specificity of three-dimensional (3D) chromosome arrangements has remained controversial. In order to overcome technical limitations of previous studies, we have developed tools that allow the quantitative 3D positional mapping of all chromosomes simultaneously. We present unequivocal evidence for a probabilistic 3D order of prometaphase chromosomes, as well as of chromosome territories (CTs) in nuclei of quiescent (G0) and cycling (early S-phase) human diploid fibroblasts (46, XY). Radial distance measurements showed a probabilistic, highly nonrandom correlation with chromosome size: small chromosomes—independently of their gene density—were distributed significantly closer to the center of the nucleus or prometaphase rosette, while large chromosomes were located closer to the nuclear or rosette rim. This arrangement was independently confirmed in both human fibroblast and amniotic fluid cell nuclei. Notably, these cell types exhibit flat-ellipsoidal cell nuclei, in contrast to the spherical nuclei of lymphocytes and several other human cell types, for which we and others previously demonstrated gene-density-correlated radial 3D CT arrangements. Modeling of 3D CT arrangements suggests that cell-type-specific differences in radial CT arrangements are not solely due to geometrical constraints that result from nuclear shape differences. We also found gene-density-correlated arrangements of higher-order chromatin shared by all human cell types studied so far. Chromatin domains, which are gene-poor, form a layer beneath the nuclear envelope, while gene-dense chromatin is enriched in the nuclear interior. We discuss the possible functional implications of this finding.

Jenny A. Croft,  Joanna M. Bridger,  Shelagh Boyle … (1999)
Using fluorescence in situ hybridization we show striking differences in nuclear position, chromosome morphology, and interactions with nuclear substructure for human chromosomes 18 and 19. Human chromosome 19 is shown to adopt a more internal position in the nucleus than chromosome 18 and to be more extensively associated with the nuclear matrix. The more peripheral localization of chromosome 18 is established early in the cell cycle and is maintained thereafter. We show that the preferential localization of chromosomes 18 and 19 in the nucleus is reflected in the orientation of translocation chromosomes in the nucleus. Lastly, we show that the inhibition of transcription can have gross, but reversible, effects on chromosome architecture. Our data demonstrate that the distribution of genomic sequences between chromosomes has implications for nuclear structure and we discuss our findings in relation to a model of the human nucleus that is functionally compartmentalized.

S. Henderson,  D. Spector,  R O’Keefe (1992)
Five distinct patterns of DNA replication have been identified during S- phase in asynchronous and synchronous cultures of mammalian cells by conventional fluorescence microscopy, confocal laser scanning microscopy, and immunoelectron microscopy. During early S-phase, replicating DNA (as identified by 5-bromodeoxyuridine incorporation) appears to be distributed at sites throughout the nucleoplasm, excluding the nucleolus. In CHO cells, this pattern of replication peaks at 30 min into S-phase and is consistent with the localization of euchromatin. As S-phase continues, replication of euchromatin decreases and the peripheral regions of heterochromatin begin to replicate. This pattern of replication peaks at 2 h into S-phase. At 5 h, perinucleolar chromatin as well as peripheral areas of heterochromatin peak in replication. 7 h into S-phase interconnecting patches of electron-dense chromatin replicate. At the end of S-phase (9 h), replication occurs at a few large regions of electron-dense chromatin. Similar or identical patterns have been identified in a variety of mammalian cell types. The replication of specific chromosomal regions within the context of the BrdU-labeling patterns has been examined on an hourly basis in synchronized HeLa cells. Double labeling of DNA replication sites and chromosome-specific alpha-satellite DNA sequences indicates that the alpha-satellite DNA replicates during mid S-phase (characterized by the third pattern of replication) in a variety of human cell types. Our data demonstrates that specific DNA sequences replicate at spatially and temporally defined points during the cell cycle and supports a spatially dynamic model of DNA replication.