Combination Therapy of Sorafenib and TACE for Unresectable HCC: A Systematic Review and Meta-Analysis 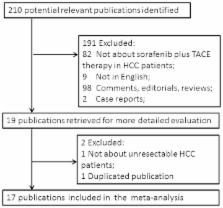 A large number of studies have tried to combine sorafenib with TACE for patients with unresectable hepatocellular carcinoma (HCC) and the results were controversial. We conducted this systematic review and meta-analysis to evaluate the safety and efficacy of combination therapy of sorafenib and TACE in the management of unresectable HCC.

MEDLINE, PsycINFO, Scopus, EMBASE, and the Cochrane Library were searched from January 1990 to October 2013 and these databases were searched for appropriate studies combining TACE and sorafenib in treatment of HCC. Two authors independently reviewed the databases and extracted the data and disagreements were resolved by discussion. Effective value and safety were analyzed. Effective value included disease control rate (DCR), time to progression (TTP) and overall survival (OS).

Combination therapy may bring benefits for unresectable HCC patients in terms of TTP but not OS. Further well-designed randomized controlled studies are needed to confirm the efficacy of combination therapy.

Clinical management of hepatocellular carcinoma. Conclusions of the Barcelona-2000 EASL conference. European Association for the Study of the Liver.

Rising incidence of hepatocellular carcinoma in the United States.

Preclinical overview of sorafenib, a multikinase inhibitor that targets both Raf and VEGF and PDGF receptor tyrosine kinase signaling.

M Wilhelm,  Josep Llovet,  Augusto Villanueva … (2008)
Although patients with advanced refractory solid tumors have poor prognosis, the clinical development of targeted protein kinase inhibitors offers hope for the future treatment of many cancers. In vivo and in vitro studies have shown that the oral multikinase inhibitor, sorafenib, inhibits tumor growth and disrupts tumor microvasculature through antiproliferative, antiangiogenic, and/or proapoptotic effects. Sorafenib has shown antitumor activity in phase II/III trials involving patients with advanced renal cell carcinoma and hepatocellular carcinoma. The multiple molecular targets of sorafenib (the serine/threonine kinase Raf and receptor tyrosine kinases) may explain its broad preclinical and clinical activity. This review highlights the antitumor activity of sorafenib across a variety of tumor types, including renal cell, hepatocellular, breast, and colorectal carcinomas in the preclinical setting. In particular, preclinical evidence that supports the different mechanisms of action of sorafenib is discussed.

No current funding sources for this study.