Analgesic effects of amiodarone in mouse models of pain 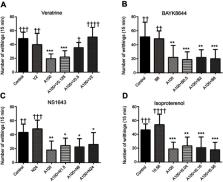 Purpose: Although amiodarone is classified as a Vaughan-Williams class Ⅲ antiarrhythmic drug, it has inhibitory effects on voltage-gated sodium and calcium channels and on β-adrenergic receptors. Given these pharmacological profiles, amiodarone may have analgesic properties. Most patients who are prescribed amiodarone possess multiple cardiovascular risk factors. Despite the fact that pain plays a crucial role as a clinical indicator of cardiovascular events, the effects of amiodarone on pain have not been investigated. The aim of the current study was to investigate the analgesic effects of amiodarone by using mouse models of pain in an effort to elucidate underlying mechanisms.

Results: During the acetic acid-induced writhing test, formalin test, and tail withdrawal test, amiodarone induced analgesic responses in a dose-dependent manner. The analgesic effects of amiodarone were abolished by veratrine but not by NS1643, BAYK8644, or isoproterenol.

Michael Hole,  S Hunskaar (1987)
The formalin test in mice is a valid and reliable model of nociception and is sensitive for various classes of analgesic drugs. The noxious stimulus is an injection of dilute formalin (1% in saline) under the skin of the dorsal surface of the right hindpaw. The response is the amount of time the animals spend licking the injected paw. Two distinct periods of high licking activity can be identified, an early phase lasting the first 5 min and a late phase lasting from 20 to 30 min after the injection of formalin. In order to elucidate the involvement of inflammatory processes in the two phases, we tested different classes of drugs in the two phases independently. Morphine, codeine, nefopam, and orphenadrine, as examples of centrally acting analgesics, were antinociceptive in both phases. In contrast, the non-steroid anti-inflammatory drugs indomethacin and naproxen and the steroids dexamethasone and hydrocortisone inhibited only the late phase, while acetylsalicylic acid (ASA) and paracetamol were antinociceptive in both phases. The results demonstrate that the two phases in the formalin test may have different nociceptive mechanisms. It is suggested that the early phase is due to a direct effect on nociceptors and that prostaglandins do not play an important role during this phase. The late phase seems to be an inflammatory response with inflammatory pain that can be inhibited by anti-inflammatory drugs. ASA and paracetamol seem to have actions independent of their inhibition of prostaglandin synthesis and they also have effects on non-inflammatory pain.

The increased trafficking of the calcium channel subunit alpha2delta-1 to presynaptic terminals in neuropathic pain is inhibited by the alpha2delta ligand pregabalin.

Claudia S Bauer (corresponding) ,  Manuela Nieto-Rostro,  Wahida Rahman … (2009)
Neuropathic pain results from damage to the peripheral sensory nervous system, which may have a number of causes. The calcium channel subunit alpha(2)delta-1 is upregulated in dorsal root ganglion (DRG) neurons in several animal models of neuropathic pain, and this is causally related to the onset of allodynia, in which a non-noxious stimulus becomes painful. The therapeutic drugs gabapentin and pregabalin (PGB), which are both alpha(2)delta ligands, have antiallodynic effects, but their mechanism of action has remained elusive. To investigate this, we used an in vivo rat model of neuropathy, unilateral lumbar spinal nerve ligation (SNL), to characterize the distribution of alpha(2)delta-1 in DRG neurons, both at the light- and electron-microscopic level. We found that, on the side of the ligation, alpha(2)delta-1 was increased in the endoplasmic reticulum of DRG somata, in intracellular vesicular structures within their axons, and in the plasma membrane of their presynaptic terminals in superficial layers of the dorsal horn. Chronic PGB treatment of SNL animals, at a dose that alleviated allodynia, markedly reduced the elevation of alpha(2)delta-1 in the spinal cord and ascending axon tracts. In contrast, it had no effect on the upregulation of alpha(2)delta-1 mRNA and protein in DRGs. In vitro, PGB reduced plasma membrane expression of alpha(2)delta-1 without affecting endocytosis. We conclude that the antiallodynic effect of PGB in vivo is associated with impaired anterograde trafficking of alpha(2)delta-1, resulting in its decrease in presynaptic terminals, which would reduce neurotransmitter release and spinal sensitization, an important factor in the maintenance of neuropathic pain.

Opening paths to novel analgesics: the role of potassium channels in chronic pain