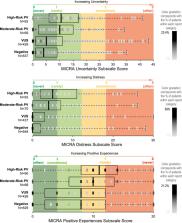 Little is known about the psychological outcomes of germline multigene panel testing, particularly among diverse patients and those with moderate‐risk pathogenic variants (PVs).

Study participants (N = 1264) were counseled and tested with a 25‐ or 28‐gene panel and completed a 3‐month postresult survey including the Multidimensional Impact of Cancer Risk Assessment (MICRA).

The mean age was 52 years, 80% were female, and 70% had cancer; 45% were non‐Hispanic White, 37% were Hispanic, 10% were Asian, 3% were Black, and 5% had another race/ethnicity. Approximately 28% had a high school education or less, and 23% were non–English‐speaking. The genetic test results were as follows: 7% had a high‐risk PV, 6% had a moderate‐risk PV, 35% had a variant of uncertain significance (VUS), and 52% were negative. Most participants (92%) had a total MICRA score ≤ 38, which corresponded to a mean response of “never,” “rarely,” or only “sometimes” reacting negatively to results. A multivariate analysis found that mean total MICRA scores were significantly higher (more uncertainty/distress) among high‐ and moderate‐risk PV carriers (29.7 and 24.8, respectively) than those with a VUS or negative results (17.4 and 16.1, respectively). Having cancer or less education was associated with a significantly higher total MICRA score; race/ethnicity was not associated with the total MICRA score. High‐ and moderate‐risk PV carriers did not differ significantly from one another in the total MICRA score, uncertainty, distress, or positive experiences.

Multigene panel tests for hereditary cancer have become widespread despite concerns that carriers of moderate‐risk pathogenic variants or uncertain variants could have adverse psychological reactions. This large cohort study of patients undergoing panel testing has found that the psychological response is favorable, regardless of genetic test results.

Andrea Desmond,  Allison Kurian,  Michele Gabree … (2015)
The practice of genetic testing for hereditary breast and/or ovarian cancer (HBOC) is rapidly evolving owing to the recent introduction of multigene panels. While these tests may identify 40% to 50% more individuals with hereditary cancer gene mutations than does testing for BRCA1/2 alone, whether finding such mutations will alter clinical management is unknown.

Multiplex genetic testing for cancer susceptibility: out on the high wire without a net?

Uptake, Results, and Outcomes of Germline Multiple-Gene Sequencing After Diagnosis of Breast Cancer