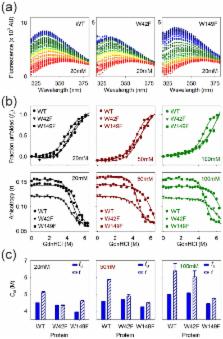 Attachment invasion locus (Ail) protein of Yersinia pestis is a crucial outer membrane protein for host invasion and determines bacterial survival within the host. Despite its importance in pathogenicity, surprisingly little is known on Ail biophysical properties. We investigate the contribution of micelle concentrations and interface tryptophans on the Ail β-barrel refolding and unfolding processes. Our results reveal that barrel folding is surprisingly independent of micelle amounts, but proceeds through an on-pathway intermediate that requires the interface W42 for cooperative barrel refolding. On the contrary, the unfolding event is strongly controlled by absolute micelle concentrations. We find that upon Trp→Phe substitution, protein stabilities follow the order W149F>WT>W42F for the refolding, and W42F>WT>W149F for unfolding. W42 confers cooperativity in barrel folding, and W149 clamps the post-folded barrel structure to its micelle environment. Our analyses reveal, for the first time, that interface tryptophan mutation can indeed render greater β-barrel stability. Furthermore, hysteresis in Ail stems from differential barrel-detergent interaction strengths in a micelle concentration-dependent manner, largely mediated by W149. The kinetically stabilized Ail β-barrel has strategically positioned tryptophans to balance efficient refolding and subsequent β-barrel stability, and may be evolutionarily chosen for optimal functioning of Ail during Yersinia pathogenesis.

The preference of tryptophan for membrane interfaces.

K Gawrisch, Peter S. White, William Wimley … (1998)
One of the ubiquitous features of membrane proteins is the preference of tryptophan and tyrosine residues for membrane surfaces that presumably arises from enhanced stability due to distinct interfacial interactions. The physical basis for this preference is widely believed to arise from amphipathic interactions related to imino group hydrogen bonding and/or dipole interactions. We have examined these and other possibilities for tryptophan's interfacial preference by using 1H magic angle spinning (MAS) chemical shift measurements, two-dimensional (2D) nuclear Overhauser effect spectroscopy (2D-NOESY) 1H MAS NMR, and solid state 2H NMR to study the interactions of four tryptophan analogues with phosphatidylcholine membranes. We find that the analogues reside in the vicinity of the glycerol group where they all cause similar modest changes in acyl chain organization and that hydrocarbon penetration was not increased by reduction of hydrogen bonding or electric dipole interaction ability. These observations rule out simple amphipathic or dipolar interactions as the physical basis for the interfacial preference. More likely, the preference is dominated by tryptophan's flat rigid shape that limits access to the hydrocarbon core and its pi electronic structure and associated quadrupolar moment (aromaticity) that favor residing in the electrostatically complex interface environment.

How proteins adapt to a membrane-water interface.

J.Antoinette Killian, Gunnar von Heijne (2000)
Membrane proteins present a hydrophobic surface to the surrounding lipid, whereas portions protruding into the aqueous milieu expose a polar surface. But how have proteins evolved to deal with the complex environment at the membrane-water interface? Some insights have been provided by high-resolution structures of membrane proteins, and recent studies of the role of individual amino acids in mediating protein-lipid contacts have shed further light on this issue. It now appears clear that the polar-aromatic residues Trp and Tyr have a specific affinity for a region near the lipid carbonyls, whereas positively charged residues extend into the lipid phosphate region.

Karen G. Fleming, C. S. Moon (2011)
The transfer free energies of the twenty natural amino acid side chains from water to phospholipid bilayers make a major contribution to the assembly and function of membrane proteins. Measurements of those transfer free energies will facilitate the identification of membrane protein sequences and aid in the understanding of how proteins interact with membranes during key biological events. We report the first water-to-bilayer transfer free energy scale (i.e., a "hydrophobicity scale") for the twenty natural amino acid side chains measured in the context of a native transmembrane protein and a phospholipid bilayer. Our measurements reveal parity for apolar side-chain contributions between soluble and membrane proteins and further demonstrate that an arginine side-chain placed near the middle of a lipid bilayer is accommodated with much less energetic cost than predicted by molecular dynamics simulations.