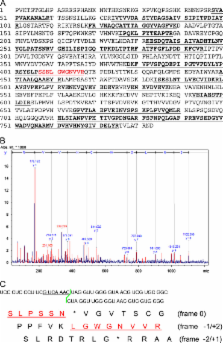 Orsay virus is the first identified virus that is capable of naturally infecting Caenorhabditis elegans. Although it is most closely related to nodaviruses, Orsay virus differs from nodaviruses in its genome organization. In particular, the Orsay virus RNA2 segment encodes a putative novel protein of unknown function, termed delta, which is absent from all known nodaviruses. Here we present evidence that Orsay virus utilizes a ribosomal frameshifting strategy to express a novel fusion protein from the viral capsid (alpha) and delta ORFs. Moreover, the fusion protein was detected in purified virus fractions, demonstrating that it is most likely incorporated into Orsay virions. Furthermore, N-terminal sequencing of both the fusion protein and the capsid protein demonstrated that these proteins must be translated from a non-canonical initiation site. While the function of the alpha–delta fusion remains cryptic, these studies provide novel insights into the fundamental properties of this new clade of viruses.

W. Li,  Jui-fen R Lu,  M R Maduro … (2005)
The worm Caenorhabditis elegans is a model system for studying many aspects of biology, including host responses to bacterial pathogens, but it is not known to support replication of any virus. Plants and insects encode multiple Dicer enzymes that recognize distinct precursors of small RNAs and may act cooperatively. However, it is not known whether the single Dicer of worms and mammals is able to initiate the small RNA-guided RNA interference (RNAi) antiviral immunity as occurs in plants and insects. Here we show complete replication of the Flock house virus (FHV) bipartite, plus-strand RNA genome in C. elegans. We show that FHV replication in C. elegans triggers potent antiviral silencing that requires RDE-1, an Argonaute protein essential for RNAi mediated by small interfering RNAs (siRNAs) but not by microRNAs. This immunity system is capable of rapid virus clearance in the absence of FHV B2 protein, which acts as a broad-spectrum RNAi inhibitor upstream of rde-1 by targeting the siRNA precursor. This work establishes a C. elegans model for genetic studies of animal virus-host interactions and indicates that mammals might use a siRNA pathway as an antiviral response.