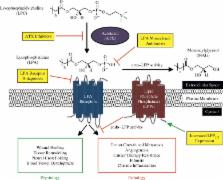 Extracellular lysophosphatidate (LPA) is a potent bioactive lipid that signals through six G-protein-coupled receptors. This signaling is required for embryogenesis, tissue repair and remodeling processes. LPA is produced from circulating lysophosphatidylcholine by autotaxin (ATX), and is degraded outside cells by a family of three enzymes called the lipid phosphate phosphatases (LPPs). In many pathological conditions, particularly in cancers, LPA concentrations are increased due to high ATX expression and low LPP activity. In cancers, LPA signaling drives tumor growth, angiogenesis, metastasis, resistance to chemotherapy and decreased efficacy of radiotherapy. Hence, targeting the ATX-LPA-LPP axis is an attractive strategy for introducing novel adjuvant therapeutic options. In this review, we will summarize current progress in targeting the ATX-LPA-LPP axis with inhibitors of autotaxin activity, LPA receptor antagonists, LPA monoclonal antibodies, and increasing low LPP expression. Some of these agents are already in clinical trials and have applications beyond cancer, including chronic inflammatory diseases.

Nrf2 enhances resistance of cancer cells to chemotherapeutic drugs, the dark side of Nrf2.

Xiao Wang,  L Villeneuve,  Maria P. Wong … (2008)
Drug resistance during chemotherapy is the major obstacle to the successful treatment of many cancers. Here, we report that inhibition of NF-E2-related factor 2 (Nrf2) may be a promising strategy to combat chemoresistance. Nrf2 is a critical transcription factor regulating a cellular protective response that defends cells against toxic insults from a broad spectrum of chemicals. Under normal conditions, the low constitutive amount of Nrf2 protein is maintained by the Kelch-like ECH-associated protein1 (Keap1)-mediated ubiquitination and proteasomal degradation system. Upon activation, this Keap1-dependent Nrf2 degradation mechanism is quickly inactivated, resulting in accumulation and activation of the antioxidant response element (ARE)-dependent cytoprotective genes. Since its discovery, Nrf2 has been viewed as a 'good' transcription factor that protects us from many diseases. In this study, we demonstrate the dark side of Nrf2: stable overexpression of Nrf2 resulted in enhanced resistance of cancer cells to chemotherapeutic agents including cisplatin, doxorubicin and etoposide. Inversely, downregulation of the Nrf2-dependent response by overexpression of Keap1 or transient transfection of Nrf2-small interfering RNA (siRNA) rendered cancer cells more susceptible to these drugs. Upregulation of Nrf2 by the small chemical tert-butylhydroquinone (tBHQ) also enhanced the resistance of cancer cells, indicating the feasibility of using small chemical inhibitors of Nrf2 as adjuvants to chemotherapy to increase the efficacy of chemotherapeutic agents. Furthermore, we provide evidence that the strategy of using Nrf2 inhibitors to increase efficacy of chemotherapeutic agents is not limited to certain cancer types or anticancer drugs and thus can be applied during the course of chemotherapy to treat many cancer types.

Strategies and challenges for the next generation of therapeutic antibodies.

Thierry Wurch,  Alain Beck,  Nathalie Corvaïa … (2010)
Antibodies and related products are the fastest growing class of therapeutic agents. By analysing the regulatory approvals of IgG-based biotherapeutic agents in the past 10 years, we can gain insights into the successful strategies used by pharmaceutical companies so far to bring innovative drugs to the market. Many challenges will have to be faced in the next decade to bring more efficient and affordable antibody-based drugs to the clinic. Here, we discuss strategies to select the best therapeutic antigen targets, to optimize the structure of IgG antibodies and to design related or new structures with additional functions.

Deron R. Herr,  T. Mutoh,  Taka-aki Noguchi … (2009)
Lysophosphatidic acid (LPA) is a small, ubiquitous phospholipid that acts as an extracellular signaling molecule by binding to and activating at least five known G protein-coupled receptors (GPCRs): LPA(1)-LPA(5). They are encoded by distinct genes named LPAR1-LPAR5 in humans and Lpar1-Lpar5 in mice. The biological roles of LPA are diverse and include developmental, physiological, and pathophysiological effects. This diversity is mediated by broad and overlapping expression patterns and multiple downstream signaling pathways activated by cognate LPA receptors. Studies using cloned receptors and genetic knockout mice have been instrumental in uncovering the significance of this signaling system, notably involving basic cellular processes as well as multiple organ systems such as the nervous system. This has further provided valuable proof-of-concept data to support LPA receptors and LPA metabolic enzymes as targets for the treatment of medically important diseases that include neuropsychiatric disorders, neuropathic pain, infertility, cardiovascular disease, inflammation, fibrosis, and cancer.

The authors reported no conflict of interests.