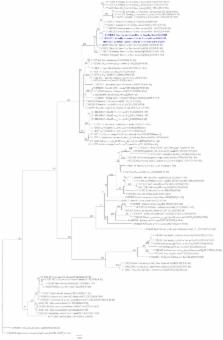 Aquatic birds are the natural reservoir for avian influenza viruses (AIV). Habitats in Brazil provide stopover and wintering sites for water birds that migrate between North and South America. The current study was conducted to elucidate the possibility of the transport of influenza A viruses by birds that migrate annually between the Northern and Southern Hemispheres. In total, 556 orotracheal/cloacal swab samples were collected for influenza A virus screening using real-time RT-PCR (rRT-PCR). The influenza A virus-positive samples were subjected to viral isolation. Four samples were positive for the influenza A matrix gene by rRT-PCR. From these samples, three viruses were isolated, sequenced and characterized. All positive samples originated from a single bird species, the ruddy turnstone ( Arenaria interpres), that was caught in the Amazon region at Caeté Bay, Northeast Pará, at Ilha de Canelas. To our knowledge, this is the first isolation of H11N9 in the ruddy turnstone in South America.

Z. Zhang,  S Schwartz,  L. L. Wagner … (2015)
For aligning DNA sequences that differ only by sequencing errors, or by equivalent errors from other sources, a greedy algorithm can be much faster than traditional dynamic programming approaches and yet produce an alignment that is guaranteed to be theoretically optimal. We introduce a new greedy alignment algorithm with particularly good performance and show that it computes the same alignment as does a certain dynamic programming algorithm, while executing over 10 times faster on appropriate data. An implementation of this algorithm is currently used in a program that assembles the UniGene database at the National Center for Biotechnology Information.

Global patterns of influenza a virus in wild birds.

Jonas Waldenström,  V Munster,  Björn Olsen … (2006)
The outbreak of highly pathogenic avian influenza of the H5N1 subtype in Asia, which has subsequently spread to Russia, the Middle East, Europe, and Africa, has put increased focus on the role of wild birds in the persistence of influenza viruses. The ecology, epidemiology, genetics, and evolution of pathogens cannot be fully understood without taking into account the ecology of their hosts. Here, we review our current knowledge on global patterns of influenza virus infections in wild birds, discuss these patterns in the context of host ecology and in particular birds' behavior, and identify some important gaps in our current knowledge.

Spatial, Temporal, and Species Variation in Prevalence of Influenza A Viruses in Wild Migratory Birds

This work has been funded in part by the Fundacão de Amparo a Pesquisa do Estado de São Paulo (FAPESP), Conselho Nacional de Desenvolvimento a Pesquisa (CNPq), Ministério da Agricultura, Pecuária e Abastecimento (MAPA), the Wildlife Conservation Society (WCS) and the National Institute of Allergy and Infectious Diseases of the National Institutes of Health, under contract number HHSN266200700005C and ALSAC. The funders had no role in the study design, data collection and analysis, decision to publish or preparation of the manuscript.