Insecticide resistance in Anopheles gambiae: data from the first year of a multi-country study highlight the extent of the problem 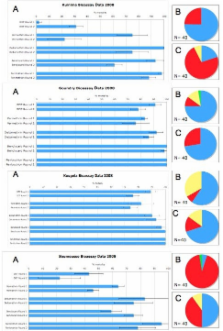 Insecticide resistance in malaria vectors is a growing concern in many countries which requires immediate attention because of the limited chemical arsenal available for vector control. The current extent and distribution of this resistance in many parts of the continent is unknown and yet such information is essential for the planning of effective malaria control interventions.

In 2008, a network was established, with financial support from WHO/TDR, to investigate the extent of insecticide resistance in malaria vectors in five African countries. Here, the results of bioassays on Anopheles gambiae sensu lato from two rounds of monitoring from 12 sentinel sites in three of the partner countries are reported.

Resistance is very heterogeneous even over relatively small distances. Furthermore, in some sites, large differences in mortality rates were observed during the course of the malaria transmission season. Using WHO diagnostic doses, all populations from Burkina Faso and Chad and two of the four populations from Sudan were classified as resistant to permethrin and/or deltamethrin. Very high frequencies of DDT resistance were found in urban areas in Burkina Faso and Sudan and in a cotton-growing district in Chad. In areas where both An. gambiae s.s. and Anopheles arabiensis were present, resistance was found in both species, although generally at a higher frequency in An gambiae s.s. Anopheles gambiae s.l. remains largely susceptible to the organophosphate fenitrothion and the carbamate bendiocarb in the majority of the sentinel sites with the exception of two sites in Burkina Faso. In the cotton-growing region of Soumousso in Burkina Faso, the vector population is resistant to all four classes of insecticide available for malaria control.

Possible factors influencing the frequency of resistant individuals observed in the sentinel sites are discussed. The results of this study highlight the importance of standardized longitudinal insecticide resistance monitoring and the urgent need for studies to monitor the impact of this resistance on malaria vector control activities.

Simultaneous identification of species and molecular forms of the Anopheles gambiae complex by PCR-RFLP.

C. Fanello,  B Torre,  F Santolamazza (2002)
For differential identification of sibling species in the Anopheles gambiae Giles complex (Diptera: Culicidae), including simultaneous separation of M and S molecular forms within An. gambiae Giles sensu stricto, we describe a PCR-RFLP method. This procedure is more efficient, faster and cheaper than those used before, so is recommended for large-scale processing of field-collected larval and adult specimens to be identified in malaria vector studies.

The role of agricultural use of insecticides in resistance to pyrethroids in Anopheles gambiae s.l. in Burkina Faso.

Thierry Baldet,  Abdoulaye Diabate,  Cecile Brengues … (2002)
Agricultural use of insecticides is involved in the selection of resistance to these compounds in field populations of mosquitoes in Burkina Faso. Anopheles gambiae s.l. was resistant to permethrin and DDT in cotton-growing and urban areas, but susceptible in areas with limited insecticide selection pressure (rice fields and control areas). Nevertheless, resistance to these insecticides was observed in a village on the outskirts of the rice fields at the end of the rainy season, suggesting that the latter population of mosquitoes had migrated from the surrounding cotton villages into the rice fields. A seasonal variation of resistance observed in the cotton-growing area is related to the distribution of the molecular M and S forms of An. gambiae, since resistance to pyrethroids has so far only been reported in the S form. Pyrethroid resistance in west African An. gambiae was conferred by target site insensitivity through a knockdown resistance (kdr)-like mutation, which was present at high frequencies in mosquitoes in the cotton-growing and urban areas.