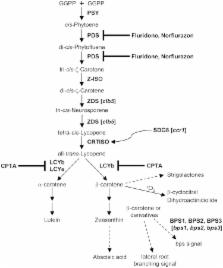 Carotenoids (C 40) are synthesized in plastids and perform numerous important functions in these organelles. In addition, carotenoids can be processed into smaller signaling molecules that regulate various phases of the plant’s life cycle. Besides the relatively well-studied phytohormones abscisic acid (ABA) and strigolactones (SLs), additional carotenoid-derived signaling molecules have been discovered and shown to regulate plant growth and development. As a few excellent reviews summarized recent research on ABA and SLs, this mini review will focus on progress made on identification and characterization of the emerging carotenoid-derived signals. Overall, a better understanding of carotenoid-derived signaling molecules has immediate applications in improving plant biomass production which in turn will have far reaching impacts on providing food, feed, and fuel for the growing world population.

Christian Triantaphylidès,  Michel Havaux (2009)
Singlet oxygen ((1)O(2)) is a singular reactive oxygen species (ROS) that is produced constitutively in plant leaves in light via chlorophylls that act as photosensitizers. This (1)O(2) production is spatially resolved within thylakoid membranes and is enhanced under light stress conditions. (1)O(2) can also be produced by phytotoxins during plant-pathogen interactions. (1)O(2) is highly reactive, can be toxic to cells and can be involved in the signaling of programmed cell death or acclimation processes. Here, we summarize current knowledge on (1)O(2) management in plants and on the biological effects of this peculiar ROS. Compared with other ROS, (1)O(2) has received relatively little attention, but recent developments indicate that it has a crucial role in the responses of plants to light.

Christian Triantaphylidès,  Ludivine Soubigou-Taconnat,  Fanny Ramel … (2012)
(1)O(2) (singlet oxygen) is a reactive O(2) species produced from triplet excited chlorophylls in the chloroplasts, especially when plants are exposed to excess light energy. Similarly to other active O(2) species, (1)O(2) has a dual effect: It is toxic, causing oxidation of biomolecules, and it can act as a signal molecule that leads to cell death or to acclimation. Carotenoids are considered to be the main (1)O(2) quenchers in chloroplasts, and we show here that light stress induces the oxidation of the carotenoid β-carotene in Arabidopsis plants, leading to the accumulation of different volatile derivatives. One such compound, β-cyclocitral, was found to induce changes in the expression of a large set of genes that have been identified as (1)O(2) responsive genes. In contrast, β-cyclocitral had little effect on the expression of H(2)O(2) gene markers. β-Cyclocitral-induced reprogramming of gene expression was associated with an increased tolerance to photooxidative stress. The results indicate that β-cyclocitral is a stress signal produced in high light that is able to induce defense mechanisms and represents a likely messenger involved in the (1)O(2) signaling pathway in plants.

The roles of ROS and ABA in systemic acquired acclimation.

Ron Mittler,  Eduardo Blumwald (2015)
Systemic responses to environmental stimuli are essential for the survival of multicellular organisms. In plants, they are initiated in response to many different signals including pathogens, wounding, and abiotic stresses. Recent studies highlighted the importance of systemic acquired acclimation to abiotic stresses in plants and identified several different signals involved in this response. These included reactive oxygen species (ROS) and calcium waves, hydraulic waves, electric signals, and abscisic acid (ABA). Here, we address the interactions between ROS and ABA at the local and systemic tissues of plants subjected to abiotic stress and attempt to propose a model for the involvement of ROS, ABA, and stomata in systemic signaling leading to systemic acquired acclimation.