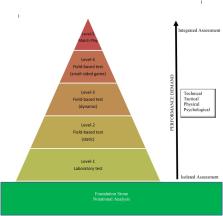 Identifying sporting talent remains a difficult task due to the complex nature of sport. Technical skill assessments are used throughout the talent pathway to monitor athletes in an attempt to more effectively predict future performance. These assessments, however, largely focus on the isolated execution of key skills devoid of any game context. When assessments are representative of match-play and applied in a setting where all four components of competition (i.e., technical, tactical, physiological, and psychological) are assessed within an integrated approach, prediction of talent is more likely to be successful. This article explores the current talent identification technical skill assessments, with a particular focus on Australian Football, and proposes a 5-level performance assessment model for athlete assessment. The model separates technical game skill on a continuum from Level-1 (i.e., laboratory analysis) to Level-5 (i.e., match-play). These levels, using the assumptions of the expert performance model and representative learning design theory, incorporate a step-wise progression of performance demands to more closely represent match-play conditions. The proposed model will provide researchers and practitioners with a structured framework to consider when assessing, or developing, new assessments of technical game-based skill.

Physiology of small-sided games training in football: a systematic review.

Aaron Coutts,  Brian Dawson,  Adrian V. S. Hill … (2011)
Small-sided games (SSGs) are played on reduced pitch areas, often using modified rules and involving a smaller number of players than traditional football. These games are less structured than traditional fitness training methods but are very popular training drills for players of all ages and levels. At present, there is relatively little information regarding how SSGs can best be used to improve physical capacities and technical or tactical skills in footballers. However, many prescriptive variables controlled by the coach can influence the exercise intensity during SSGs. Coaches usually attempt to change the training stimulus in SSGs through altering the pitch area, player number, coach encouragement, training regimen (continuous vs interval training), rules and the use of goalkeepers. In general, it appears that SSG exercise intensity is increased with the concurrent reduction in player number and increase in relative pitch area per player. However, the inverse relationship between the number of players in each SSG and exercise intensity does not apply to the time-motion characteristics. Consistent coach encouragement can also increase training intensity, but most rule changes do not appear to strongly affect exercise intensity. The variation of exercise intensity measures are lower in smaller game formats (e.g. three vs three) and have acceptable reproducibility when the same game is repeated between different training sessions or within the same session. The variation in exercise intensity during SSGs can also be improved with consistent coach encouragement but it is still more variable than traditional generic training methods. Other studies have also shown that SSGs containing fewer players can exceed match intensity and elicit similar intensities to both long- and short-duration high-intensity interval running. It also appears that fitness and football-specific performance can be improved equally with SSG and generic training drills. Future research is required to examine the optimal periodization strategies of SSGs training for the long-term development of physiological capacity, technical skill and tactical proficiency. © 2011 Adis Data Information BV. All rights reserved.

Talent identification and development in soccer.

Mary T. Reilly,  Amanda C de C Williams (2000)
In this review, we attempt to integrate the main research findings concerned with talent identification and development in soccer. Research approaches in anthropometry, physiology, psychology and sociology are considered and, where possible, integrated. Although some progress has been made in identifying correlates of playing success, it appears that no unique characteristics can be isolated with confidence. Both biological and behavioural scientists have indicated a strong genetic component in performance of sports such as soccer; nevertheless, the influence of systematic training and development programmes should not be underestimated. We conclude that the sport and exercise sciences have an important support role in the processes of identifying, monitoring and nurturing talented soccer players towards realizing their potential.

The ecological dynamics of decision making in sport

This article was submitted to Movement Science and Sport Psychology, a section of the journal Frontiers in Psychology