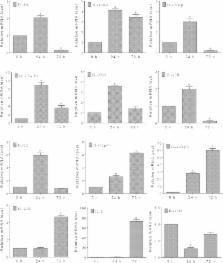 Inflammation is a protective response that is implicated in bacterial enteritis and other fish diseases. The inflammatory mechanisms behind Aeromonas hydrophila infections in fish remain poorly understood. In this study, we performed a de novo grass carp transcriptome assembly using Illumina’s Solexa sequencing technique. On this basis we carried out a comparative analysis of intestinal transcriptomes from A. hydrophila-challenged and physiological saline solution (PSS/mock) -challenged fish, and 315 genes were up-regulated and 234 were down-regulated in the intestines infected with A. hydrophila. The GO enrichment analysis indicated that the differentially expressed genes were enriched to 12, 4, and 8 GO terms in biological process, molecular function, and cellular component, respectively. A KEGG analysis showed that 549 DEGs were involved in 165 pathways. Moreover, 15 DEGs were selected for quantitative real-time PCR analysis to validate the RNA-seq data. The results confirmed the consistency of the expression levels between RNA-seq and qPCR data. In addition, a time-course analysis of the mRNA expression of 12 inflammatory genes further demonstrated that the intestinal inflammatory responses to A. hydrophila infection simultaneously modulated gene expression variations. The present study provides intestine-specific transcriptome data, allowing us to unravel the mechanisms of intestinal inflammation triggered by bacterial pathogens.

S. Goto,  M Kanehisa (2000)
KEGG (Kyoto Encyclopedia of Genes and Genomes) is a knowledge base for systematic analysis of gene functions, linking genomic information with higher order functional information. The genomic information is stored in the GENES database, which is a collection of gene catalogs for all the completely sequenced genomes and some partial genomes with up-to-date annotation of gene functions. The higher order functional information is stored in the PATHWAY database, which contains graphical representations of cellular processes, such as metabolism, membrane transport, signal transduction and cell cycle. The PATHWAY database is supplemented by a set of ortholog group tables for the information about conserved subpathways (pathway motifs), which are often encoded by positionally coupled genes on the chromosome and which are especially useful in predicting gene functions. A third database in KEGG is LIGAND for the information about chemical compounds, enzyme molecules and enzymatic reactions. KEGG provides Java graphics tools for browsing genome maps, comparing two genome maps and manipulating expression maps, as well as computational tools for sequence comparison, graph comparison and path computation. The KEGG databases are daily updated and made freely available (http://www. genome.ad.jp/kegg/).

Nicholas L. Abbott,  J. Janda (2009)
Over the past decade, the genus Aeromonas has undergone a number of significant changes of practical importance to clinical microbiologists and scientists alike. In parallel with the molecular revolution in microbiology, several new species have been identified on a phylogenetic basis, and the genome of the type species, A. hydrophila ATCC 7966, has been sequenced. In addition to established disease associations, Aeromonas has been shown to be a significant cause of infections associated with natural disasters (hurricanes, tsunamis, and earthquakes) and has been linked to emerging or new illnesses, including near-drowning events, prostatitis, and hemolytic-uremic syndrome. Despite these achievements, issues still remain regarding the role that Aeromonas plays in bacterial gastroenteritis, the extent to which species identification should be attempted in the clinical laboratory, and laboratory reporting of test results from contaminated body sites containing aeromonads. This article provides an extensive review of these topics, in addition to others, such as taxonomic issues, microbial pathogenicity, and antimicrobial resistance markers.

Inflammasome adaptors and sensors: intracellular regulators of infection and inflammation.

Denise Monack,  Sanjeev Mariathasan (2006)
The NOD-like receptors have important roles in innate immunity as intracellular sensors of microbial components and cell injury. It has been proposed that these cytosolic proteins regulate the cysteine protease caspase-1 within a multiprotein complex known as the 'inflammasome'. Activation of caspase-1 leads to the cleavage and activation of pro-inflammatory cytokines such as interleukin-1beta (IL-1beta) and IL-18, as well as host-cell death. The analysis of mice that are deficient in various inflammasome components has revealed that the inflammasome is a dynamic entity that is assembled from different adaptors in a stimulus-dependent manner. Here we review recent work on the activation of the inflammasome in response to various bacterial pathogens and tissue damage.