Semi-automated segmentation and quantification of adipose tissue in calf and thigh by MRI: a preliminary study in patients with monogenic metabolic syndrome 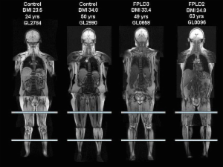 With the growing prevalence of obesity and metabolic syndrome, reliable quantitative imaging methods for adipose tissue are required. Monogenic forms of the metabolic syndrome include Dunnigan-variety familial partial lipodystrophy subtypes 2 and 3 (FPLD2 and FPLD3), which are characterized by the loss of subcutaneous fat in the extremities. Through magnetic resonance imaging (MRI) of FPLD patients, we have developed a method of quantifying the core FPLD anthropometric phenotype, namely adipose tissue in the mid-calf and mid-thigh regions.

Four female subjects, including an FPLD2 subject ( LMNA R482Q), an FPLD3 subject ( PPARG F388L), and two control subjects were selected for MRI and analysis. MRI scans of subjects were performed on a 1.5T GE MR Medical system, with 17 transaxial slices comprising a 51 mm section obtained in both the mid-calf and mid-thigh regions. Using ImageJ 1.34 n software, analysis of raw MR images involved the creation of a connectedness map of the subcutaneous adipose tissue contours within the lower limb segment from a user-defined seed point. Quantification of the adipose tissue was then obtained after thresholding the connected map and counting the voxels (volumetric pixels) present within the specified region.

MR images revealed significant differences in the amounts of subcutaneous adipose tissue in lower limb segments of FPLD3 and FPLD2 subjects: respectively, mid-calf, 15.5% and 0%, and mid-thigh, 25.0% and 13.3%. In comparison, old and young healthy controls had values, respectively, of mid-calf, 32.5% and 26.2%, and mid-thigh, 52.2% and 36.1%. The FPLD2 patient had significantly reduced subcutaneous adipose tissue compared to FPLD3 patient.

Thus, semi-automated quantification of adipose tissue of the lower extremity can detect differences between individuals of various lipodystrophy genotypes and represents a potentially useful tool for extended quantitative phenotypic analysis of other genetic metabolic disorders.

Nanne K. De Vries,  Derek Smith,  L deJonge … (2001)
Obesity is related to the risk for developing non-insulin-dependent diabetes mellitus (NIDDM), hypertension, and cardiovascular disease. Visceral adipose tissue (VAT) has been proposed to mediate these relationships. Abdominal subcutaneous adipose tissue (SAT) is divided into 2 layers by a fascia, the fascia superficialis. Little is known about the radiologic anatomy or metabolic correlates of these depots. The objective of this study was to relate the amounts of VAT, SAT, deep subcutaneous abdominal adipose tissue (DSAT), and superficial subcutaneous abdominal adipose tissue (SSAT) to gender and the metabolic complications of obesity after adjusting for total body fat and to discuss the implications of these findings on the measurement of adipose tissue mass and adipose tissue function. The design was a cross-sectional database study set in a nutrition research center. Subjects included 199 volunteers participating in nutrition research protocols who also had computed tomography (CT) and dual energy x-ray absorptiometry (DEXA) measurement of body fat. The amount of DSAT was sexually dimorphic, with women having 51% of the subcutaneous abdominal fat in the deep layer versus 66% for men (P <.05). Abdominal fat compartments were compared with metabolic variables before and after adjusting for body fat measured by DEXA using 2 separate methods. The unadjusted correlation coefficients between the body fat measures, R(2), were largest for fasting insulin and triglyceride and smaller for high-density lipoprotein (HDL) cholesterol and blood pressure. A large portion of the variance of fasting insulin levels in both men and women was explained by total body fat. In both men and women, the addition of VAT and subcutaneous abdominal adipose tissue depots only slightly increased the R(2). In men, when body fat compartments were considered independently, DSAT explained a greater portion of the variance (R(2) =.528) in fasting insulin than VAT (R(2) =.374) or non-VAT, non-DSAT subcutaneous adipose tissue (R(2) =.375). These data suggest that total body fat is a major contributor to the metabolic sequelae of obesity, with specific fat depots, VAT, and DSAT also making significant contributions. Copyright 2001 by W.B. Saunders Company

In vivo determination of intra-myocellular lipids in human muscle by means of localized 1H-MR-spectroscopy.

R Kreis,  J Slotboom,  H Hoppeler … (1997)
Intra-myocellular lipids (IMCL) are stored in droplets in the cytoplasm of muscle cells and are an energy storage form readily accessed during long-term exercise. 1H-MR spectroscopy methods are presented for noninvasive determination of IMCL in human muscle. This is based on (a) the separation of two resonances in the lipid-CH2-region, with the one assigned to IMCL being independent of muscle orientation relative to the magnetic field and (b) the fact that IMCL resonances scale along with signal amplitudes of metabolites in the muscle cell (e.g., creatine) when voxel size is increased, while lipid signals of bulk fat show a disproportionate growth. Inter-individual and intra-individual reproducibility studies indicate that the error of the method is about 6% and that IMCL levels differ significantly between identical muscles in different subjects, as well as intra-individually when measured at 1 week intervals. IMCL determinations in a single subject before and after strenuous exercise indicate that lipid stores recover with a t1/2 of about 1 day.