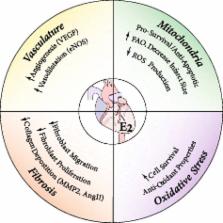 Epidemiologic studies have previously suggested that premenopausal females have reduced incidence of cardiovascular disease (CVD) when compared to age-matched males, and the incidence and severity of CVD increases postmenopause. The lower incidence of cardiovascular disease in women during reproductive age is attributed at least in part to estrogen (E2). E2 binds to the traditional E2 receptors (ERs), estrogen receptor alpha (ERα), and estrogen receptor beta (ERβ), as well as the more recently identified G-protein-coupled ER (GPR30), and can exert both genomic and non-genomic actions. This review summarizes the protective role of E2 and its receptors in the cardiovascular system and discusses its underlying mechanisms with an emphasis on oxidative stress, fibrosis, angiogenesis, and vascular function. This review also presents the sexual dimorphic role of ERs in modulating E2 action in cardiovascular disease. The controversies surrounding the clinical use of exogenous E2 as a therapeutic agent for cardiovascular disease in women due to the possible risks of thrombotic events, cancers, and arrhythmia are also discussed. Endogenous local E2 biosynthesis from the conversion of testosterone to E2 via aromatase enzyme offers a novel therapeutic paradigm. Targeting specific ERs in the cardiovascular system may result in novel and possibly safer therapeutic options for cardiovascular protection.

S Hulley, D Grady, T. Bush … (1998)
Observational studies have found lower rates of coronary heart disease (CHD) in postmenopausal women who take estrogen than in women who do not, but this potential benefit has not been confirmed in clinical trials. To determine if estrogen plus progestin therapy alters the risk for CHD events in postmenopausal women with established coronary disease. Randomized, blinded, placebo-controlled secondary prevention trial. Outpatient and community settings at 20 US clinical centers. A total of 2763 women with coronary disease, younger than 80 years, and postmenopausal with an intact uterus. Mean age was 66.7 years. Either 0.625 mg of conjugated equine estrogens plus 2.5 mg of medroxyprogesterone acetate in 1 tablet daily (n = 1380) or a placebo of identical appearance (n = 1383). Follow-up averaged 4.1 years; 82% of those assigned to hormone treatment were taking it at the end of 1 year, and 75% at the end of 3 years. The primary outcome was the occurrence of nonfatal myocardial infarction (MI) or CHD death. Secondary cardiovascular outcomes included coronary revascularization, unstable angina, congestive heart failure, resuscitated cardiac arrest, stroke or transient ischemic attack, and peripheral arterial disease. All-cause mortality was also considered. Overall, there were no significant differences between groups in the primary outcome or in any of the secondary cardiovascular outcomes: 172 women in the hormone group and 176 women in the placebo group had MI or CHD death (relative hazard [RH], 0.99; 95% confidence interval [CI], 0.80-1.22). The lack of an overall effect occurred despite a net 11% lower low-density lipoprotein cholesterol level and 10% higher high-density lipoprotein cholesterol level in the hormone group compared with the placebo group (each P<.001). Within the overall null effect, there was a statistically significant time trend, with more CHD events in the hormone group than in the placebo group in year 1 and fewer in years 4 and 5. More women in the hormone group than in the placebo group experienced venous thromboembolic events (34 vs 12; RH, 2.89; 95% CI, 1.50-5.58) and gallbladder disease (84 vs 62; RH, 1.38; 95% CI, 1.00-1.92). There were no significant differences in several other end points for which power was limited, including fracture, cancer, and total mortality (131 vs 123 deaths; RH, 1.08; 95% CI, 0.84-1.38). During an average follow-up of 4.1 years, treatment with oral conjugated equine estrogen plus medroxyprogesterone acetate did not reduce the overall rate of CHD events in postmenopausal women with established coronary disease. The treatment did increase the rate of thromboembolic events and gallbladder disease. Based on the finding of no overall cardiovascular benefit and a pattern of early increase in risk of CHD events, we do not recommend starting this treatment for the purpose of secondary prevention of CHD. However, given the favorable pattern of CHD events after several years of therapy, it could be appropriate for women already receiving this treatment to continue.

Disruption of coordinated cardiac hypertrophy and angiogenesis contributes to the transition to heart failure.

Ichiro Shiojima, Kaori Sato, Yasuhiro Izumiya … (2005)
Although increased external load initially induces cardiac hypertrophy with preserved contractility, sustained overload eventually leads to heart failure through poorly understood mechanisms. Here we describe a conditional transgenic system in mice characterized by the sequential development of adaptive cardiac hypertrophy with preserved contractility in the acute phase and dilated cardiomyopathy in the chronic phase following the induction of an activated Akt1 gene in the heart. Coronary angiogenesis was enhanced during the acute phase of adaptive cardiac growth but reduced as hearts underwent pathological remodeling. Enhanced angiogenesis in the acute phase was associated with mammalian target of rapamycin-dependent induction of myocardial VEGF and angiopoietin-2 expression. Inhibition of angiogenesis by a decoy VEGF receptor in the acute phase led to decreased capillary density, contractile dysfunction, and impaired cardiac growth. Thus, both heart size and cardiac function are angiogenesis dependent, and disruption of coordinated tissue growth and angiogenesis in the heart contributes to the progression from adaptive cardiac hypertrophy to heart failure.