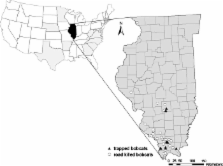 A total of 6257 helminths of 19 taxa were recovered from the digestive tract and lungs of 67 bobcats in Illinois. Infections caused by Alaria mustelae, Diphyllobothrium latum, and Macracanthorhynchus ingens are reported for the first time in bobcats. From all the taxa recovered, only three species occurred in high prevalence and caused intense infections: Taenia rileyi, Alaria marcianae, and Toxocara cati, with prevalence and mean intensity of 70% and 6; 42% and 193, and 25% and 14 individuals, respectively. Prevalence lower than 15% of 14 helminth species suggests bobcats are not continuously exposed to infective stages of a single parasite, and may be exposed to a large variety of generalists during their lifespan. No significant difference in parasite species according to host sex or age was detected, except for Diphyllobothrium spp., which were found more frequently in females and in trapped bobcats, and the hookworm, Ancylostoma caninum, which infected juveniles more frequently. Average species richness per infracommunity was 2.4 (±1.2), and the parasite component community showed low qualitative similarity with neighbor communities. The taxa A. caninum, Alaria spp., Diphyllobothrium spp., Paragonimus kellicotti, and T. cati are etiological agents of epizootic and zoonotic diseases.

Human population: the next half century.

Paula Cohen (2003)
By 2050, the human population will probably be larger by 2 to 4 billion people, more slowly growing (declining in the more developed regions), more urban, especially in less developed regions, and older than in the 20th century. Two major demographic uncertainties in the next 50 years concern international migration and the structure of families. Economies, nonhuman environments, and cultures (including values, religions, and politics) strongly influence demographic changes. Hence, human choices, individual and collective, will have demographic effects, intentional or otherwise.

The role of companion animals in the emergence of parasitic zoonoses.

I.D. Robertson,  P.J. Irwin,  A.J. Lymbery … (2000)
Pets offer individuals and the community significant benefits, however cognisance must be taken of the potential for transmission of infectious agents from these animals to humans. The prevalence of many parasites, such as Giardia and Cryptosporidium, has increased over the past few decades while others, such as Toxocara and Ancylostoma, have decreased. These changes could be real, associated with the ready availability of efficacious anthelmintic products or could be artificial due to the type of surveys conducted, the animals surveyed and the diagnostic tests used. Immunocompromised people, in particular, must be aware of the potential risk of acquiring parasitic infections from their pets. However, with the adoption of good hygiene and a thorough knowledge of the transmission of these parasites, immunocompromised people should be able to continue to enjoy the significant benefits of pet ownership. As many owners are not aware of the zoonotic parasites that could be carried by their pets or their mode of transmission, it is concluded that veterinarians need to play a greater role in the education of their clients.

Maggie Fisher (2003)
The role of Toxocara cati as a zoonosis is reviewed. It is suggested that, despite case histories of human infection in the literature, historical factors have led to T. cati being under-recognized as a zoonosis, particularly when compared with the prominence given to Toxocara canis in dogs. Differentiation of the two infections remains challenging even today. It is recommended that further work be conducted to facilitate differentiation so that the importance of T. cati as a zoonosis can be clearly defined.