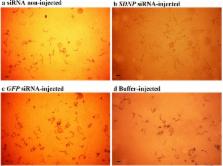 Functional analysis of animal parasitic nematode genes is often quite challenging due to the unavailability of standardised in vitro culture conditions and lack of adequate tools to manipulate these genes. Therefore, this study was undertaken to investigate the suitability of Culex quinquefasciatus, as an in vivo culture platform for Setaria digitata larvae and RNA interference (RNAi), as a post-transcriptional gene silencing tool to study the roles of a vital gene that encodes a novel parasitic nematode-specific protein ( SDNP).

The red colour fluorescence detected following RNAi injection to the thorax of C. quinquefasciatus indicated the uptake of dsRNA by S. digitata larvae. The reduction of SDNP transcripts in siRNA treated larvae compared to non-treated larvae, as determined by qPCR, indicated that the siRNA pathway is operational in S. digitata larvae. The observation of motility reductions and deformities during the development indicated the association of SDNP in larvae locomotion and development processes, respectively. The irregularities in the migration of larvae in mosquitoes and elevated survival rates of mosquitoes compared to their untreated counterparts indicated reduced parasitism of S. digitata larvae in mosquitoes upon targeted downregulation of SDNP by siRNA treatment.

SDNP plays vital roles in muscle contraction, locomotion, development processes, larval development and parasitism of S. digitata. Its ubiquitous presence in parasitic nematodes and its absence in their hosts provide a tantalising prospect of the possibility of targeting SDNP for future development of anthelmintic drugs. The susceptibility of the larval stages of S. digitata for RNAi in Culex quinquefasciatus was also demonstrated for the first time in this study.

Drug resistance in nematodes of veterinary importance: a status report.

Joshua Kaplan (2004)
Reports of drug resistance have been made in every livestock host and to every anthelmintic class. In some regions of world, the extremely high prevalence of multi-drug resistance (MDR) in nematodes of sheep and goats threatens the viability of small-ruminant industries. Resistance in nematodes of horses and cattle has not yet reached the levels seen in small ruminants, but evidence suggests that the problems of resistance, including MDR worms, are also increasing in these hosts. There is an urgent need to develop both novel non-chemical approaches for parasite control and molecular assays capable of detecting resistant worms.

Establishment and maintenance of a heterochromatin domain.

Parwinder Grewal,  Amikam Cohen,  Gurumurthy Shankaranarayana … (2002)
The higher-order assembly of chromatin imposes structural organization on the genetic information of eukaryotes and is thought to be largely determined by posttranslational modification of histone tails. Here, we study a 20-kilobase silent domain at the mating-type region of fission yeast as a model for heterochromatin formation. We find that, although histone H3 methylated at lysine 9 (H3 Lys9) directly recruits heterochromatin protein Swi6/HP1, the critical determinant for H3 Lys9 methylation to spread in cis and to be inherited through mitosis and meiosis is Swi6 itself. We demonstrate that a centromere-homologous repeat (cenH) present at the silent mating-type region is sufficient for heterochromatin formation at an ectopic site, and that its repressive capacity is mediated by components of the RNA interference (RNAi) machinery. Moreover, cenH and the RNAi machinery cooperate to nucleate heterochromatin assembly at the endogenous mat locus but are dispensable for its subsequent inheritance. This work defines sequential requirements for the initiation and propagation of regional heterochromatic domains.

Sara Lustigman,  Jing Liu,  Jun Zhang … (2004)
We describe the successful use of RNA interference (RNAi) to investigate gene function in the human filarial parasite Onchocerca volvulus third-stage larvae (L3). We targeted two specific gene products, the O. volvulus cathepsin L (Ov-CPL) and cathepsin Z-like (Ov-CPZ) cysteine proteases, which were proposed to function during O. volvulus L3 molting. We show that fluorescent-labeled Cy3-dsRNA corresponding to cpl or cpz regions encoding the mature enzymes can enter the larvae. The molting rate of larvae treated overnight with 0.5 mg ml(-1) cpl was reduced by 92% and 86% in comparison to normal control worms. It appeared that although the larvae started the molting process the last stage of molting, ecdysis was inhibited. The effect was gene specific, as larvae that did not molt in the presence of cpl or cpz dsRNA expressed the other cysteine protease, CPZ and CPL, respectively. This was confirmed by immunoelectron microscopy using antibodies directed against each enzyme. Our present study validate conclusively that both enzymes are essential for the molting of O. volvulus L3 to fourth-stage larvae. We also confirmed that the activity of the enzymes is specific to the changes that occur during the molting process on days 1-3, when the separation between the cuticles is in progress. The development of RNAi in O. volvulus L3 could further help study many of the abundant L3 and molting L3 genes identified through the filarial genome project, many of which, although have no attributed function, were identified as vaccine candidates or potential drug targets.