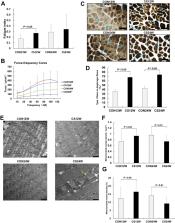 The aim of the study was to explore the functional and structural changes of the diaphragm and underlying mechanisms in response to 12 or 24 weeks of cigarette smoke (CS) exposure in rats.

Rats were exposed to CS to develop a COPD model and the rats exposed to room air served as a control group. Rats were randomly divided into four groups: CS12W, CON12W, CS24W, and CON24W. Pulmonary function, lung histopathology, and the contractile properties and ultrastructure of diaphragm muscle were examined in these rats. The changes of transcriptomic profiling of diaphragm muscle were further compared between CS and control rats by the RNA Seq.

Both CS groups showed lower FEV 0.3/FVC, elevated mean linear intercept (MLI), and reduced mean alveolar numbers (MAN) vs the control groups. The fatigue index (FI) of the diaphragm muscle from the CS12W group, but not CS24W, was significantly increased. Conversely, the force–frequency curves of the diaphragm muscle from the CS24W group, but not CS12W group, were significantly decreased. Consistently, mitochondrial number density (N A) and volume density (Vv) were increased in the CS12W diaphragm muscle, while being decreased in the CS24W group. Furthermore, the diaphragm transcriptomic profiling results showed that genes regulating cell proliferation and energy metabolic activity were un-regulated and genes regulating protein degradation were down-regulated in the CS12W diaphragm, while CS24W diaphragm showed opposite changes.

These observations suggested a transition of diaphragm muscle from initial compensatory to decompensatory changes in function, structure, and gene expression during the development of COPD.

Anthony M. Bolger,  Marc Lohse,  Bjoern Usadel (2014)
Motivation: Although many next-generation sequencing (NGS) read preprocessing tools already existed, we could not find any tool or combination of tools that met our requirements in terms of flexibility, correct handling of paired-end data and high performance. We have developed Trimmomatic as a more flexible and efficient preprocessing tool, which could correctly handle paired-end data. Results: The value of NGS read preprocessing is demonstrated for both reference-based and reference-free tasks. Trimmomatic is shown to produce output that is at least competitive with, and in many cases superior to, that produced by other tools, in all scenarios tested. Availability and implementation: Trimmomatic is licensed under GPL V3. It is cross-platform (Java 1.5+ required) and available at http://www.usadellab.org/cms/index.php?page=trimmomatic Contact: usadel@bio1.rwth-aachen.de Supplementary information: Supplementary data are available at Bioinformatics online.

KEGG for linking genomes to life and the environment

Minoru Kanehisa,  Michihiro Araki,  Susumu Goto … (2008)
KEGG (http://www.genome.jp/kegg/) is a database of biological systems that integrates genomic, chemical and systemic functional information. KEGG provides a reference knowledge base for linking genomes to life through the process of PATHWAY mapping, which is to map, for example, a genomic or transcriptomic content of genes to KEGG reference pathways to infer systemic behaviors of the cell or the organism. In addition, KEGG provides a reference knowledge base for linking genomes to the environment, such as for the analysis of drug-target relationships, through the process of BRITE mapping. KEGG BRITE is an ontology database representing functional hierarchies of various biological objects, including molecules, cells, organisms, diseases and drugs, as well as relationships among them. KEGG PATHWAY is now supplemented with a new global map of metabolic pathways, which is essentially a combined map of about 120 existing pathway maps. In addition, smaller pathway modules are defined and stored in KEGG MODULE that also contains other functional units and complexes. The KEGG resource is being expanded to suit the needs for practical applications. KEGG DRUG contains all approved drugs in the US and Japan, and KEGG DISEASE is a new database linking disease genes, pathways, drugs and diagnostic markers.