An update of teriflunomide for treatment of multiple sclerosis 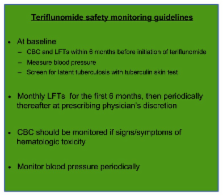 There are a number of oral agents emerging as potential disease-modifying agents in multiple sclerosis (MS). Among these investigational agents, teriflunomide has shown promise in large, multicenter, phase III clinical trials with respect to safety and efficacy in relapsing MS patients, and is the latest disease-modifying agent approved for use in MS patients in the United States. This review will summarize teriflunomide’s historical development, clinical pharmacology, studies in animals, clinical trials, and safety data, and will end with a discussion of the role of teriflunomide in MS in the context of existing treatment options.

Robert Bartlett,  Rudolf Schleyerbach (1985)
The new isoxazol derivative, N-(4-Trifluoro-methylphenyl)-5-methylisoxazol-4-carboxamide (HWA 486) has been investigated as to its disease modifying activity on adjuvant arthritis of the Lewis rat. This compound was able to prevent the onset of the adjuvant disease, provided the therapy was started within the first 12 days after its induction, reflecting properties similar to that of immunosuppressive agents. If therapy started later than 12 days, the substance was still able to reduce the degree of inflammation and arrest its progress as long as it was administered, i.e. termination of the therapy, after the establishment of adjuvant arthritis, allowed the disease to progress, a property similar to classical anti-inflammatory agents such as indomethacin. The stimulation of lymphocytes from adjuvant arthritic rats with ConA, PHA, and LPS was suppressed. Treatment of these animals with HWA 486 returned the mitogenic response to normal values. However, the lymphocytes from non-diseased animals were not affected by treatment with this substance. Cyclophosphamide, on the other hand, which also can prevent the establishment of the disease, reduces the proliferative response to mitogens in healthy animals. The characteristics of HWA 486 distinguish it from either classical anti-inflammatory drugs, such as phenylbutazone, or classical immunosuppressive agents, such as cyclophosphamide.

Rodrigo A. Fuentealba,  Jayne Marasa,  David Piwnica-Worms … (2012)
Intracellular protein aggregation is a common pathologic feature in neurodegenerative diseases such as Huntington' disease, amyotrophic lateral sclerosis and Parkinson' disease. Although progress towards understanding protein aggregation in vitro has been made, little of this knowledge has translated to patient therapy. Moreover, mechanisms controlling aggregate formation and catabolism in cellulo remain poorly understood. One limitation is the lack of tools to quantitatively monitor protein aggregation and disaggregation. Here, we developed a protein-aggregation reporter that uses huntingtin exon 1 containing 72 glutamines fused to the N-terminal end of firefly luciferase (httQ72-Luc). httQ72-Luc fails to aggregate unless seeded by a non-luciferase-containing polyglutamine (polyQ) protein such as Q80-cfp. Upon co-aggregation, httQ72-luc becomes insoluble and loses its enzymatic activity. Using httQ72-Luc with Q80(CFP/YFP) as seeds, we screened the Johns Hopkins Clinical Compound Library and identified leflunomide, a dihydroorotate dehydrogenase inhibitor with immunosuppressive and anti-psoriatic activities, as a novel drug that prevents polyQ aggregation. Leflunomide and its active metabolite teriflunomide inhibited protein aggregation independently of their known role in pyrimidine biosynthesis, since neither uridine treatment nor other pyrimidine biosynthesis inhibitors affected polyQ aggregation. Inducible cell line and cycloheximide-chase experiments indicate that these drugs prevent incorporation of expanded polyQ into an aggregate. This study demonstrates the usefulness of luciferase-based protein aggregate reporters for high-throughput screening applications. As current trials are under-way for teriflunomide in the treatment of multiple sclerosis, we propose that this drug be considered a possible therapeutic agent for polyQ diseases.

Esther Layseca-Espinosa,  Gustavo Pedraza-Alva,  José Montiel … (2003)
The CD43 coreceptor molecule has been shown to participate in lymphocyte adhesion and activation. Leukocyte homotypic aggregation results from a cascade of intracellular signals delivered to the cells upon engagement of different cell-surface molecules with their natural ligands. This phenomenon requires an active metabolism, reorganization of the cytoskeleton, and relocalization of cell-surface molecules. The aim of this study was to identify some of the key members of the signaling cascade leading to T lymphocyte homotypic aggregation following CD43 engagement. CD43-mediated homotypic aggregation of T lymphocytes required the participation of Src kinases, phospholipase C-gamma2, protein kinase C, phosphatidylinositol-3 kinase, as well as extracellular-regulated kinase 1/2 and p38. Data shown here suggest that these signaling molecules play a central role in regulating actin cytoskeleton remodeling after CD43 ligation. We also evaluated the ability of immunomodulatory drugs such as leflunomide to block the CD43-mediated homotypic aggregation. Leflunomide blocked the recruitment of targets of the Src family kinases as well as actin polymerization, diminishing the ability of T lymphocytes to aggregate in response to CD43-specific signals, suggesting that this drug might control the migration and recruitment of lymphoid cells to inflamed tissues.