Repair of DNA Strand Breaks in a Minichromosome In Vivo: Kinetics, Modeling, and Effects of Inhibitors 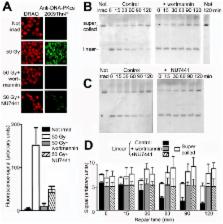 To obtain an overall picture of the repair of DNA single and double strand breaks in a defined region of chromatin in vivo, we studied their repair in a ∼170 kb circular minichromosome whose length and topology are analogous to those of the closed loops in genomic chromatin. The rate of repair of single strand breaks in cells irradiated with γ photons was quantitated by determining the sensitivity of the minichromosome DNA to nuclease S1, and that of double strand breaks by assaying the reformation of supercoiled DNA using pulsed field electrophoresis. Reformation of supercoiled DNA, which requires that all single strand breaks have been repaired, was not slowed detectably by the inhibitors of poly(ADP-ribose) polymerase-1 NU1025 or 1,5-IQD. Repair of double strand breaks was slowed by 20–30% when homologous recombination was supressed by KU55933, caffeine, or siRNA-mediated depletion of Rad51 but was completely arrested by the inhibitors of nonhomologous end-joining wortmannin or NU7441, responses interpreted as reflecting competition between these repair pathways similar to that seen in genomic DNA. The reformation of supercoiled DNA was unaffected when topoisomerases I or II, whose participation in repair of strand breaks has been controversial, were inhibited by the catalytic inhibitors ICRF-193 or F11782. Modeling of the kinetics of repair provided rate constants and showed that repair of single strand breaks in minichromosome DNA proceeded independently of repair of double strand breaks. The simplicity of quantitating strand breaks in this minichromosome provides a usefull system for testing the efficiency of new inhibitors of their repair, and since the sequence and structural features of its DNA and its transcription pattern have been studied extensively it offers a good model for examining other aspects of DNA breakage and repair.

The mechanism of double-strand DNA break repair by the nonhomologous DNA end-joining pathway.

Michael Lieber (2010)
Double-strand DNA breaks are common events in eukaryotic cells, and there are two major pathways for repairing them: homologous recombination (HR) and nonhomologous DNA end joining (NHEJ). The various causes of double-strand breaks (DSBs) result in a diverse chemistry of DNA ends that must be repaired. Across NHEJ evolution, the enzymes of the NHEJ pathway exhibit a remarkable degree of structural tolerance in the range of DNA end substrate configurations upon which they can act. In vertebrate cells, the nuclease, DNA polymerases, and ligase of NHEJ are the most mechanistically flexible and multifunctional enzymes in each of their classes. Unlike repair pathways for more defined lesions, NHEJ repair enzymes act iteratively, act in any order, and can function independently of one another at each of the two DNA ends being joined. NHEJ is critical not only for the repair of pathologic DSBs as in chromosomal translocations, but also for the repair of physiologic DSBs created during variable (diversity) joining [V(D)J] recombination and class switch recombination (CSR). Therefore, patients lacking normal NHEJ are not only sensitive to ionizing radiation (IR), but also severely immunodeficient.

Lorraine S. Symington,  Jean Gautier (2010)
DNA double-strand breaks (DSBs) are cytotoxic lesions that can result in mutagenic events or cell death if left unrepaired or repaired inappropriately. Cells use two major pathways for DSB repair: nonhomologous end joining (NHEJ) and homologous recombination (HR). The choice between these pathways depends on the phase of the cell cycle and the nature of the DSB ends. A critical determinant of repair pathway choice is the initiation of 5'-3' resection of DNA ends, which commits cells to homology-dependent repair, and prevents repair by classical NHEJ. Here, we review the components of the end resection machinery, the role of end structure, and the cell-cycle phase on resection and the interplay of end processing with NHEJ.

Identification and characterization of a novel and specific inhibitor of the ataxia-telangiectasia mutated kinase ATM.

Gordon C. S. Smith,  Nicola J. Curtin,  Elizabeth A Richardson … (2004)
The serine/threonine protein kinase ATM signals to cell cycle and DNA repair components by phosphorylating downstream targets such as p53, CHK2, NBS1, and BRCA1. Mutation of ATM occurs in the human autosomal recessive disorder ataxia-telangiectasia, which is characterized by hypersensitivity to ionizing radiation and a failure of cells to arrest the cell cycle after the induction of DNA double-strand breaks. It has thus been proposed that ATM inhibition would cause cellular radio- and chemosensitization. Through screening a small molecule compound library developed for the phosphatidylinositol 3'-kinase-like kinase family, we identified an ATP-competitive inhibitor, 2-morpholin-4-yl-6-thianthren-1-yl-pyran-4-one (KU-55933), that inhibits ATM with an IC(50) of 13 nmol/L and a Ki of 2.2 nmol/L. KU-55933 shows specificity with respect to inhibition of other phosphatidylinositol 3'-kinase-like kinases. Cellular inhibition of ATM by KU-55933 was demonstrated by the ablation of ionizing radiation-dependent phosphorylation of a range of ATM targets, including p53, gammaH2AX, NBS1, and SMC1. KU-55933 did not show inhibition of UV light DNA damage induced cellular phosphorylation events. Exposure of cells to KU-55933 resulted in a significant sensitization to the cytotoxic effects of ionizing radiation and to the DNA double-strand break-inducing chemotherapeutic agents, etoposide, doxorubicin, and camptothecin. Inhibition of ATM by KU-55933 also caused a loss of ionizing radiation-induced cell cycle arrest. By contrast, KU-55933 did not potentiate the cytotoxic effects of ionizing radiation on ataxia-telangiectasia cells, nor did it affect their cell cycle profile after DNA damage. We conclude that KU-55933 is a novel, specific, and potent inhibitor of the ATM kinase.

This work was supported partially by the Polish Ministry of Education and Science (Grant N N518 4976 39 to K.F. and J.R-W.). No additional external funding was received for this study. The funders had no role in study design, data collection and analysis, decision to publish, or preparation of the manuscript.