Correlation of changes in hemodynamic response as measured by cerebral optical spectrometry with subjective pain ratings in volunteers and patients: a prospective cohort study 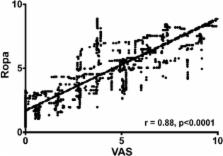 Noninvasive cerebral optical spectrometry is a promising candidate technology for the objective assessment physiological changes during pain perception. This study’s primary objective was to test if there was a significant correlation between the changes in physiological parameters as measured by a cerebral optical spectrometry-based algorithm (real-time objective pain assessment [ROPA]) and subjective pain ratings obtained from volunteers and laboring women. Secondary aims were performance assessment using linear regression and receiver operating curve (ROC) analysis.

Prospective cohort study performed in Human Pain Laboratory and Labor and Delivery Unit. After institutional review board approval, we evaluated ROPA in volunteers undergoing the cold pressor test and in laboring women before and after epidural or combined spinal epidural placement. Linear regression was performed to measure correlations. ROCs and corresponding areas under the ROCs (AUC), as well as Youden’s indices, as a measure of diagnostic effectiveness, were calculated.

Cerebral Optical Spectrometry-based ROPA significantly correlated with subjectively reported pain in volunteers and laboring women, and could be a useful monitor for clinical circumstances where direct assessment is not available, or to complement patient-reported pain scores.

Changes in skin conductance as a tool to monitor nociceptive stimulation and pain.

Hanne Storm (2008)
The skin conductance algesimeter (SCA) reflects the sympathetic nervous system influenced by changes in emotions, which releases the acetylcholine that acts on muscarine receptors, causing a subsequent burst of sweat and increased skin conductance. The SCA reacts immediately and is not influenced by hemodynamic variability or neuromuscular blockade. The use of SCA for pain and nociceptive assessment is outlined in this review. When pain was monitored by verbal reporting in postoperative patients, the SCA had a sensitivity of about 90% and specificity up to 74% to identify the pain, better than heart rate and blood pressure. In general anesthetized patients, both the sensitivity and specificity were about 90% to detect responses to noxious stimulation when compared with clinical stress variables. The SCA reflects changes in norepeinephrine levels induced by nociception better than heart rate, blood pressure, and electroencephalograph (EEG) monitors. Unlike EEG monitors, the SCA response is sensitive to experimental noxious stimuli during general anesthesia, and the measured response was attenuated by analgesic medication. This SCA response is significantly associated with genetically modulated pain sensitivity. Moreover, noxious stimuli in artificially ventilated patients and in preterm infants increase the SCA index, and the increase correlates to the clinical discomfort. The SCA detects nociceptive pain fast and continuously, specific to the individual, with higher sensitivity and specificity than other available objective methods.

Pain as the fifth vital sign: exposing the vital need for pain education.

Natalia E. Morone,  Debra Weiner (2013)
The push to evaluate pain in patients as exemplified by the fifth vital sign has exposed serious deficits in practitioner education and training in pain assessment and management because patient report of pain level has become commonplace in clinical practice. The rapid increase in prescription opioid medications suggests that practitioners are trying to address their patients' pain by prescribing opioids. However, the increase in prescription opioids has also been associated with an increase in prescription opioid-related unintended deaths. In clinical practice, the fifth vital sign has proven to be more complex to assess, evaluate, and manage than originally anticipated. Expanding pain education and training is critical to remedying some of the issues the routine report of pain by patients has uncovered.